This tutorial will explain how to use Python to encode JSON files into MongoDB BSON documents using the BSON library. The library is useful for parsing JSON objects from files, strings, a Python dictionary or list and can also convert dictionaries and lists into JSON strings. As Python 2.7 has been deprecated, Python version 3 or later is recommend when performing the examples used in this tutorial.

How to install the PyMongo and BSON libraries using PIP3

Installing only pymongo is required, however, there is a stand-alone bson library as well. Install pymongo with the BSON library for Python 3 using the following pip3 command:

If there are version conflicts or import errors, uninstall the bson and pymongo libraries and then reinstall PyMongo with the included BSON package using the following commands:

Execute the below commands in a Python interpreter, or use IDLE by typing idle3 or idle into a terminal or command prompt window, to test if the BSON library is properly installed and to confirm there are no version conflicts that will result in an ImportError: 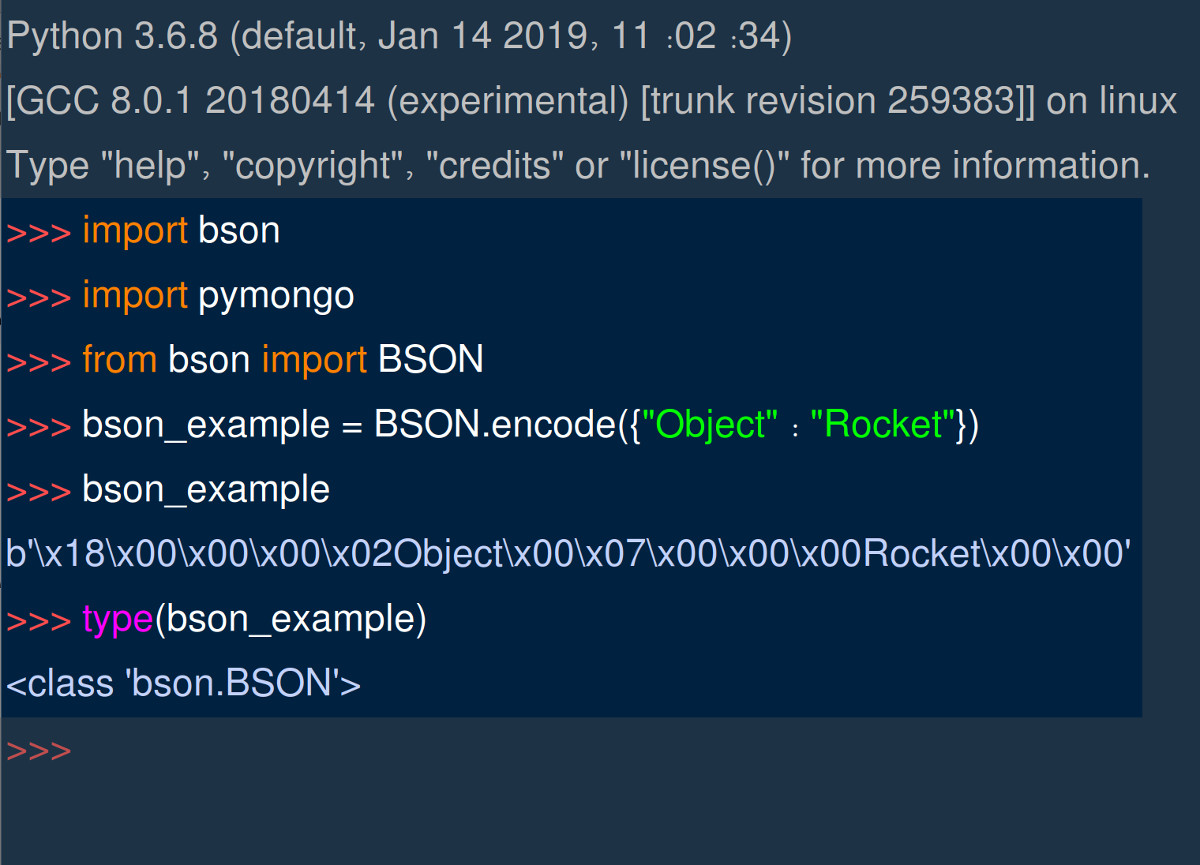 How to Create a JSON File with MongoDB Documents

Create a JSON file, with the .json file extension, and place some MongoDB documents into a JSON array enclosed in square brackets ([]) with the collection name as the array’s key.

Here are a few example documents to use:

To use these documents, copy and paste the entire JSON object into a text file and save it. Here the filename data.json is used.

Create a new Python script with the .py file extension, making sure to import the JSON and BSON libraries at the top of the script, by executing the following commands:

The Python open() function allows for opening documents, such as text, CSV, or JSON files, and returns the data as a _io.TextIOWrapper object that can be iterated over and parsed. Here is an example:

NOTE: Make sure to pass the complete file path in the file name string if the JSON file is not in the same directory path as the Python script.

After the string is loaded into the Python script it must be converted into a valid JSON Python dict before the string can be encoded into a BSON object.

The json.loads() method requires passing a valid JSON string to its method call. If the JSON string is not valid, then the JSON library will throw a ValueError exception.

The following script will execute a try-catch error indentation block to verify the JSON string is valid before attempting to encode it as a BSON object:

Because the string is missing the closing bracket (}) for the JSON object to be complete, the above example will display the following message in the terminal window:

How to pass the entire string of MongoDB documents to the json.loads() method

The json.loads() method should return a Python dict object consisting of the MongoDB documents, with the collection name as its key, provided the string was actually a valid JSON object:

How to Iterate the MongoDB Collection Names and JSON Documents

Once the JSON dictionary has been declared its collection keys can be iterated over, and subsequently each collection’s documents. This will convert the documents to BSON objects and vice versa. An example follows:

Use the bson library’s BSON.encode() method to convert the dictionary value representing the MongoDB documents into BSON objects. The following example will execute another try-except block while decoding and encoding the JSON objects:

Likewise, the BSON object can also be decoded back to a Python dict by passing the bson.BSON to theBSON.decode() method call.

The encoded BSON documents can then be inserted into a collection or used to make other API calls. The BSON format is a great way to parse MongoDB documents and is much faster than iterating JSON documents, as the former allows for skipping over unimportant MongoDB fields.

Here is a screenshot of a Python script printing the results of BSON encoded JSON documents: 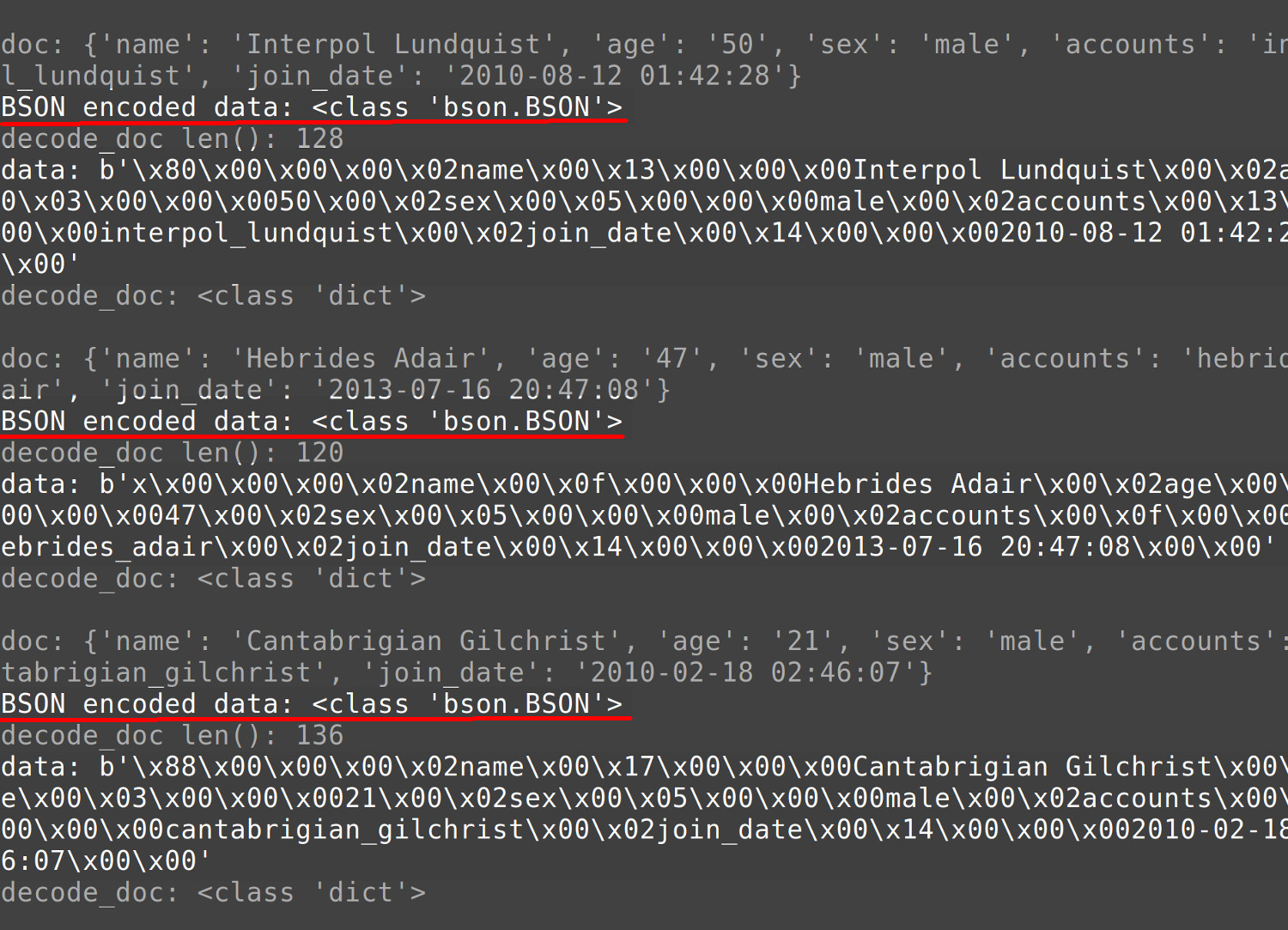