Contents
Introduction Prerequisites How to Check the MongoDB Version for Changes to the Collection Class API The ensureIndex() Python method is deprecated in version 3.0 of MongoDB How to Instantiate a MongoDB Collection Object in a Python Script How to edit the Python script and import the pymongo library’s ‘MongoClient’ class How to declare a new client instance of the Python driver for MongoDB How to instantiate a collection object from a client’s database How to Obtain All of the Index Attributes for the MongoDB Collection Class How to Use the MongoDB Collection Object’s list_indexes() Method How to iterate the CommandCursor object returned by list_indexes() How to use the Collection Object’s index_information() Method How to manage a MongoDB collection’s indexes in the Compass GUI Conclusion Just the Code

Enter the Mongo Shell by entering mongo in a terminal window to confirm the Python driver installed correctly.

Some attributes of the collection and database classes have changed or been depreciated. Execute the below commands to obtain the current version of MongoDB and the PyMongo driver before making the API calls explained in this tutorial.

Execute the following command to obtain the current version of MongoDB:

Using Python’s IDLE environment, or a Python interpreter in a terminal, run the following commands to verify the version of PyMongo:

As of June 2019, MongoDB 4.0 is the latest stable release and works well with PyMongo v3.4 that installs using PIP.

The ensureIndex() Python method is deprecated in version 3.0 of MongoDB

The ensure_index() method has been deprecated. Unless an older release of Python, MongoDB (2.x or older) and its PyMongo driver are being used, other method calls to the Collection class must be employed. The method is now just an alias for the create_index() method.

How to Instantiate a MongoDB Collection Object in a Python Script

Create a new Python script in the project directory using the .py file extension with the touch command in a terminal window as shown here:

Execute the following script to use Python’s import keyword to import the MongoClient class from the Python driver’s library:

The default domain and port URL string for the MongoClient() method call is localhost:27017, however, a URL custom string to the method call can be passed with the following command:

How to instantiate a collection object from a client’s database

Execute the following command to create a collection instance from the client object, confirming the collection contains some documents and indexes:

Mongo is constantly changing and updating the attributes of the Collection class. In order to know what method calls will work for a given version of MongoDB, iterate over all of the class’s attributes and print any attributes containing "index" in the method name using the following script:

As shown in the following image, all of the attributes names containing "index" should print out: 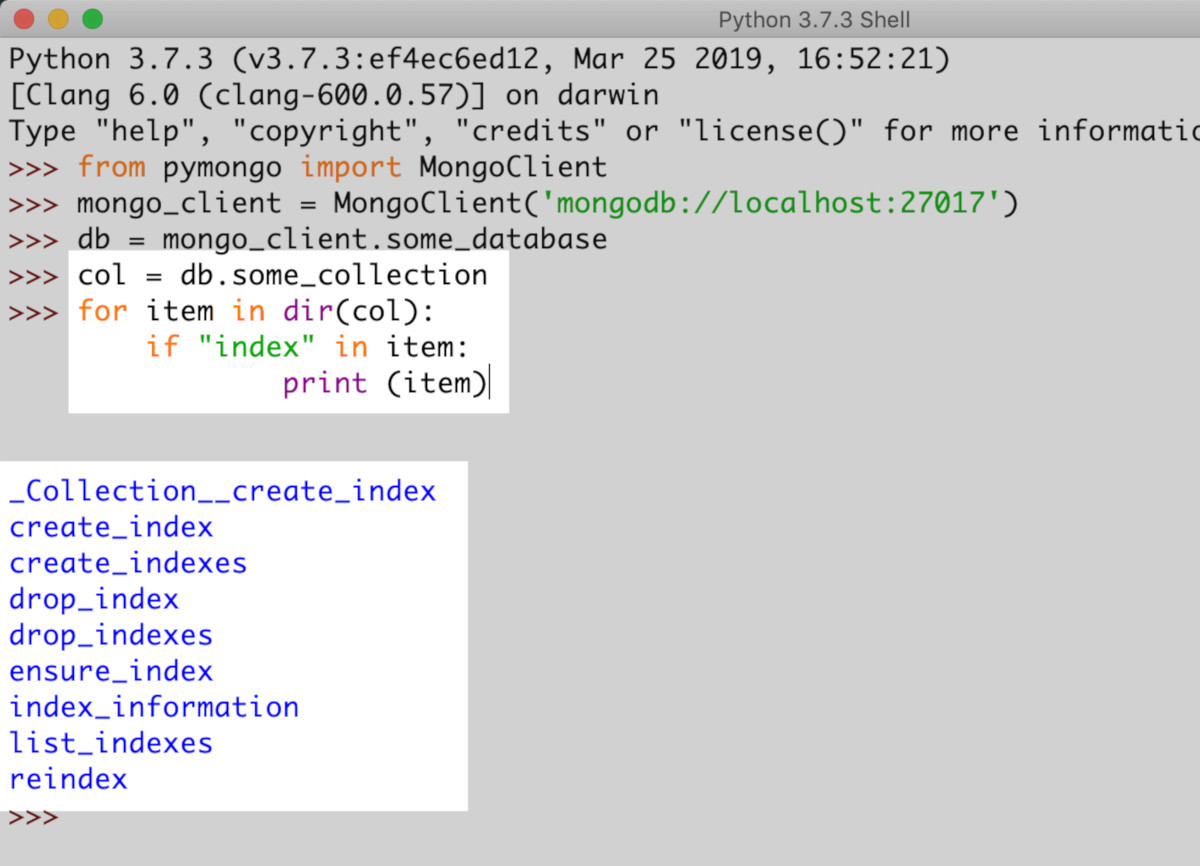 How to Use the MongoDB Collection Object’s list_indexes() Method

The system.indexes.find() method is now deprecated in MongoDB versions 3.x and newer. The list_indexes() method, shown below, must be used instead:

The collection’s built-in list_indexes() method will return a cursor (pymongo.command_cursor.CommandCursor) object. The cursor object should contain bson.son.SON class objects containing the index information. Execute the following script to iterate over the objects using the for keyword exactly the same as for any other MongoDB cursor object in Python:

NOTE: Each iteration of the CommandCursor object has attributes like a typical Python dict object with key-value pairs. Every index must have a name and v (version) key associated with it.

How to use the Collection Object’s index_information() Method

A newer method library uses the index_information() API that returns an actual Python dict object of all the collection’s indexes. Here is an example:

Iterate the dict response’s key-value pairs, making sure to use iter_items() for Python 2.7, by executing the following script:

If the MongoDB Compass application is installed on the machine, the collection’s indexes can be viewed and managed by navigating to the collection name, on the left-hand side of the window, and then clicking on the “Indexes” tab: 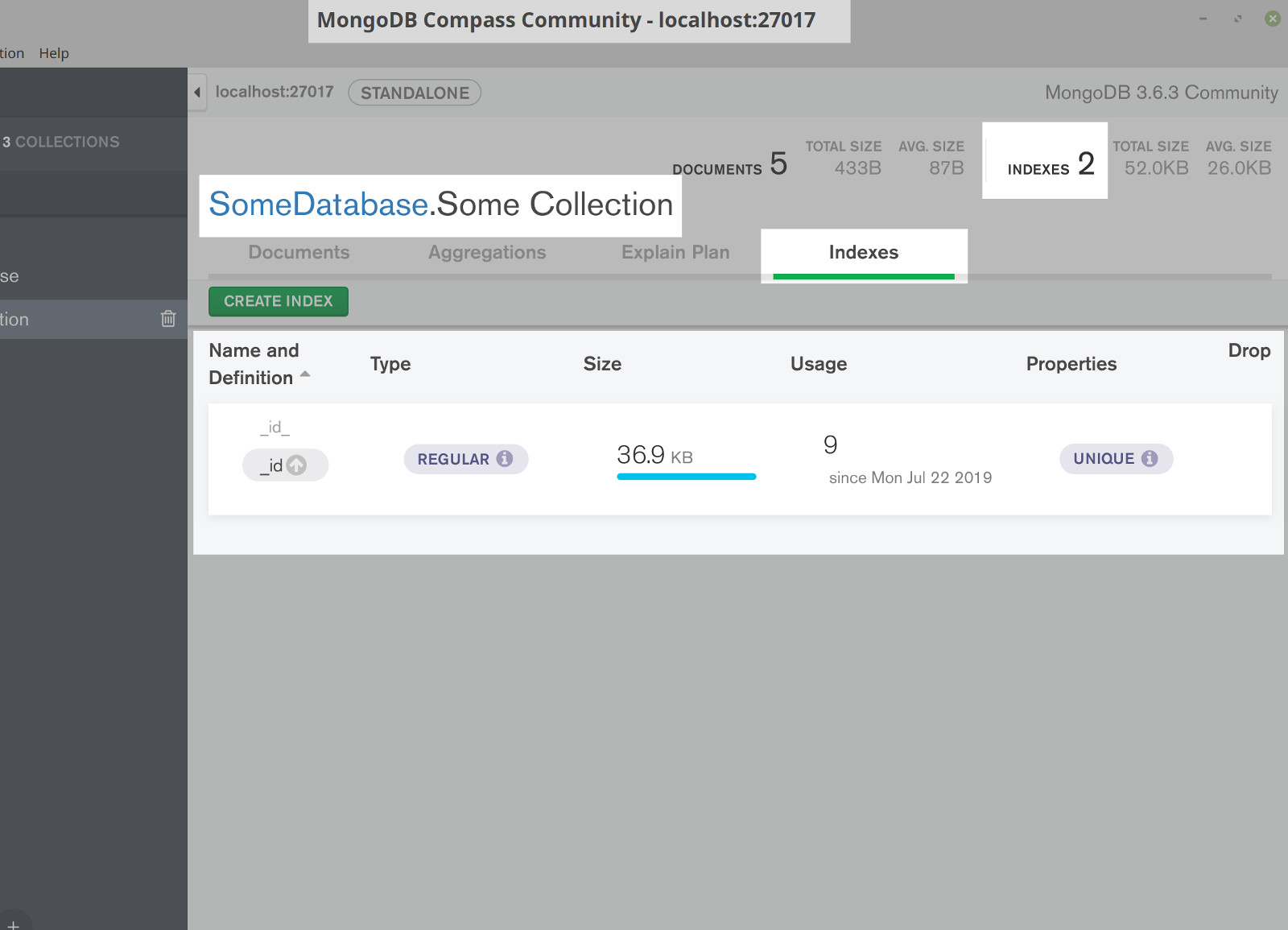 This tutorial explained how to determine if a MongoDB index exists with the Python driver. The tutorial covered how to obtain a MongoDB collection’s index names and information using the official Python driver for MongoDB. The article also explained how to obtain index attributes for the MongoDB collection class, how to check for changes to the Collection class API, how to edit the Python script and import the PyMongo library, how to declare a new client instance, instantiate a collection object from a client’s database and how to manage indexes in the Compass GUI. Remember that some attributes of the collection and database classes have depreciated. This makes it necessary to obtain the current version of MongoDB and the PyMongo driver before making the API calls explained in this tutorial.