How to Update Multiple MongoDB Documents in Python

Before we look at the Python code needed to update documents in MongoDB, it’s important to review the prerequisites. The following system requirements exist for this task:

Now that we’ve covered the system requirements, let’s take a look at the code. The first thing we’ll do is import the PyMongo library into the Python script. Then, we’ll create a new client instance of the driver:

We can then use our MongoDB client instance to access a database and one of its collections:

It’s possible to access the collection class’s methods without actually creating a collection instance. You can do this by accessing it as an attribute of the database object.

In the following example, we access a collection through the database object, and then iterate over the Cursor object to examine its documents:

Look for some MongoDB documents to update with PyMongo

Next, let’s look at an example where we use the count_documents() method to verify that the collection has some documents on it. Be sure to pass a query in the form of a dictionary to the method (or simply pass {} to find all of the collection’s documents), otherwise Python will raise a TypeError exception :

The following code shows a simple $regex query used to find documents where the "num" field has an integer value greater than 0:

The query filters for the update_many() method are very similar to the one shown in the above find() query to look for documents.

The API used to update documents works in much the same way as the Mongo Shell methods updateOne() and updateMany().

The update() method is deprecated in favor of update_one() and update_many()

>NOTE: The save() method has also been deprecated in newer versions of MongoDB. Use the update_one() or update_many() methods instead.

There are few different MongoDB update operators that can be used to modify a document’s fields in the various Update method calls. Let’s take a quick look at each of them:

$in — (only available since version 3.4 of MongoDB) $or — This operator is used to update documents that match any of several parameters.

Use the update_many() method to update multiple MongoDB documents

The update_many() method accepts a parameter in the form of dictionary object with multiple keys nested inside a list.

The next example updates any document where the "num" field has an integer value that is greater than 100. If a document meets this condition, it will be given a new field called "num check" that has a value of True:

Let’s print out the various attributes of the pymongo.results.UpdateResult object to verify that our update operation was successful: 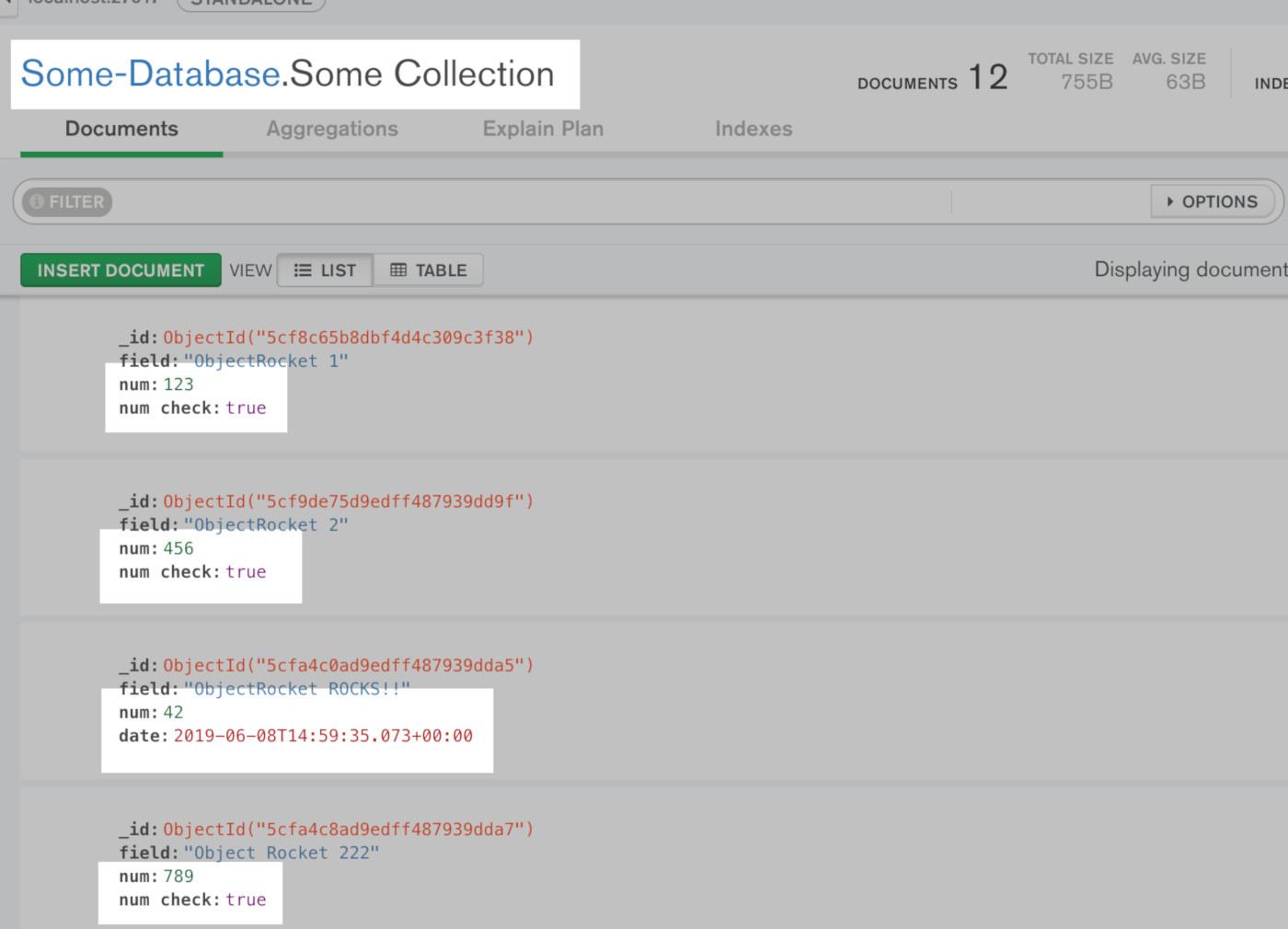 Use the $or operator to update several documents in PyMongo

The "$or" operator update option is an efficient way to pass multiple queries and update several documents at a time.

Let’s look at an example that uses the "$or" operator to pass several BSON ObjectIds. This allows us to update two specfic documents (be sure to import the ObjectId module in your script to avoid getting a NameError exception):

Note that this example uses the upsert flag. This ensures that a document will be created, with the specified _id, if none exists. After the API call, both documents were given a "date" field with a date string as the value:

You can examine the returned result object to confirm that the API call was successful, and you can also print the upserted_id attribute to see if a new document was inserted:

Here’s an example of the update_many() call that uses the $unset operator to remove a specific field from all MongoDB documents that match a filter. To remove, or “unset”, a field, simply set its value as an empty string:

This operator, along with the $rename operator, offers a convenient way to change the fields within a MongoDB collection. The following example shows an API call used to rename the fields of MongoDB documents that match the filter query:

When you want to update multiple MongoDB documents at a time, the PyMongo driver makes it easy to accomplish this task within a Python script. The examples we provided throughout this tutorial showed how to use the update_many() method to update the contents of a field, add a new field or even remove a field from any documents that match a specified query filter. Armed with these examples and instructions, you’ll have no trouble updating documents in MongoDB using Python.

Throughout this article, we’ve shown you the example code one section at a time. Included below is the complete Python script used to update multiple MongoDB documents: