Contents
Introduction to creating MongoDB queries and filters in Golang Prerequisites for making API calls to MongoDB using the official Golang driver Import the MongoDB and Go packages in a Golang script Declare a new struct for the MongoDB document fields View a collection’s document fields in the Mongo Shell Declare the Golang main() function and connect to MongoDB Declaring a BSON map MongoDB filter object Build a MongoDB filter query from a string in Golang Declare a Go string containing a MongoDB JSON filter Unmarshal a Go string using the JSON package Declare a nested bson.M MongoDB filter from the primitive.M object returned by json.Unmarshal() Use the MongoDB filter to return a Cursor object and iterate over the documents Conclusion Just the Code

Introduction to creating MongoDB queries and filters in Golang

If you’re working with MongoDB and Golang, it’s important to know how to create and format MongoDB filter queries so that they can be passed into method calls. Fortunately, this process is fairly simple and straightforward. In this article, we’ll show you how to create BSON map objects from raw JSON strings and from primitive.M BSON objects. We’ll also explain how to pass these objects to the Golang driver’s method calls to query MongoDB documents.

Before we dive into the Golang code and learn how to make API calls to MongoDB, there are a few prerequisites that need to be reviewed: 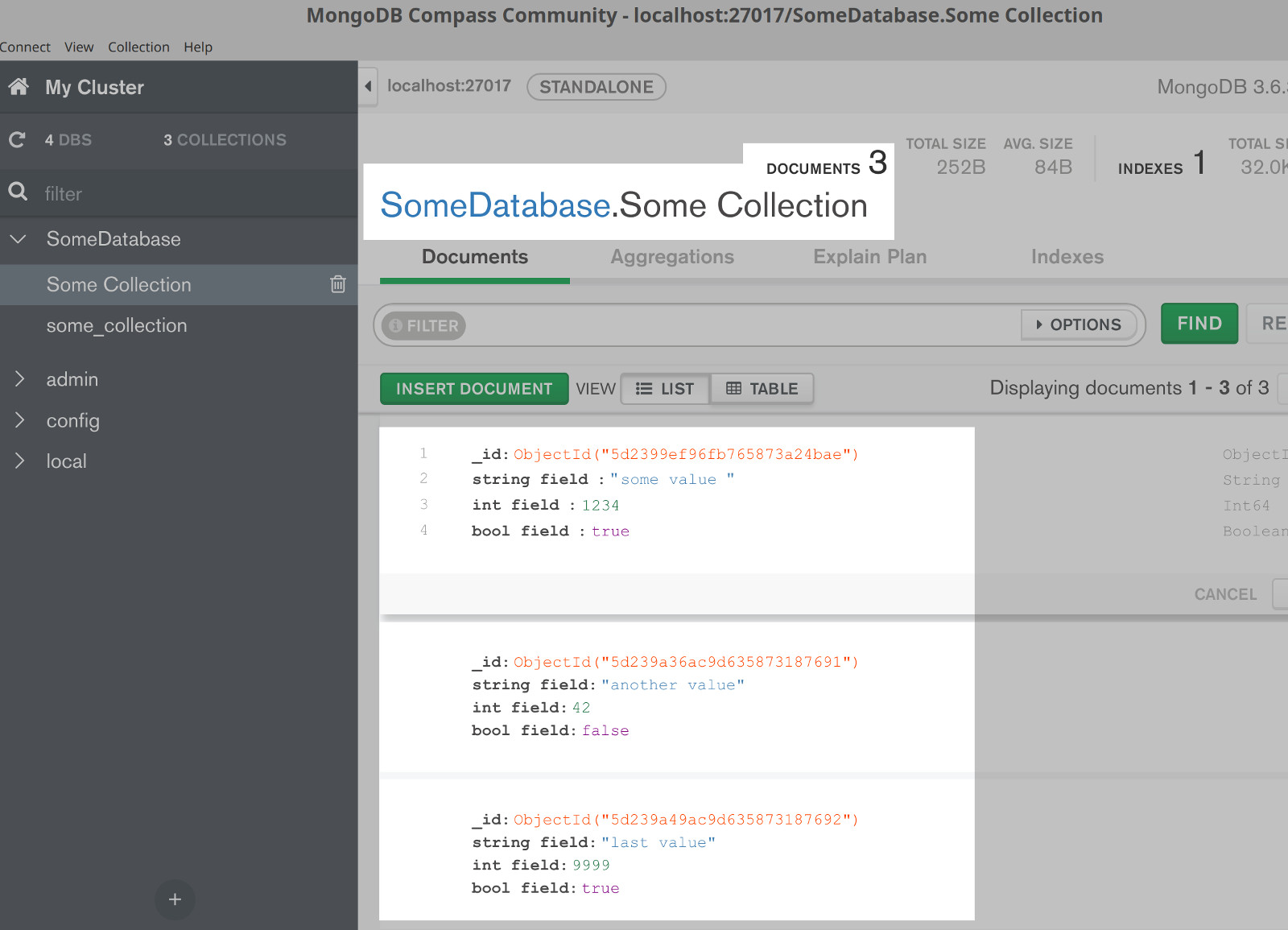 You can get information on the current value of GOPATH by using the commands go help gopath or $GOPATH. For more help with Go’s get command, enter go help get into a terminal window.

Import the MongoDB and Go packages in a Golang script

Now that we’ve gone over the prerequisites, we’re ready to turn to the code. We’ll start our script by importing the packages for MongoDB that can create BSON filters and queries and unmarshal strings in the main() function:

Declare a new struct for the MongoDB document fields

We’ll use Golang’s struct datatype to map the MongoDB fields for the collection’s documents:

View a collection’s document fields in the Mongo Shell

If you’re not sure of the datatypes for a collection’s document fields, simply enter these commands in the Mongo Shell to view the exact format of the fields: 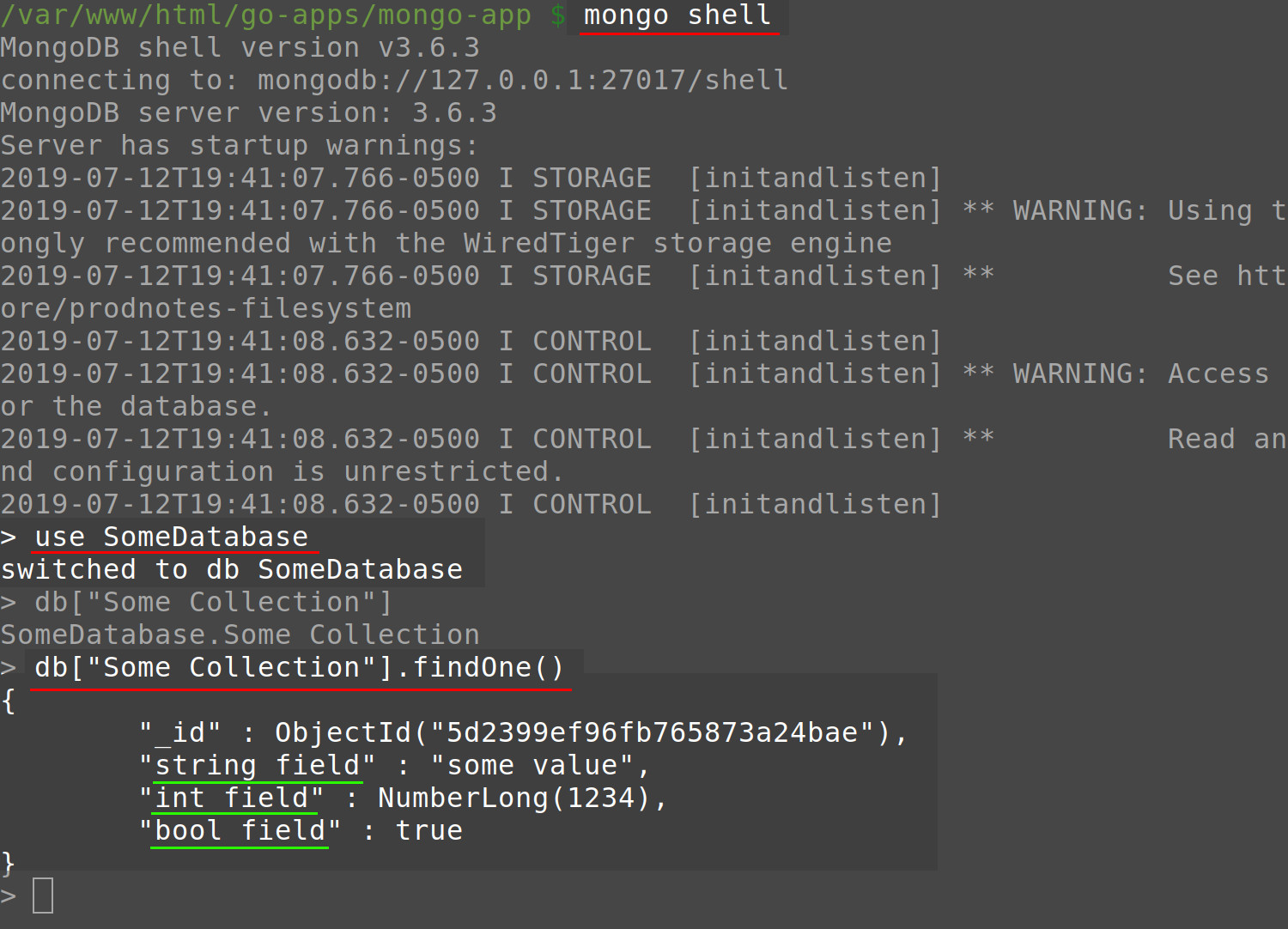 Declare the Golang main() function and connect to MongoDB

Now we’ll declare the main() function, which is necessary for the MongoDB API calls and document iteration. We can connect to the MongoDB server using mongo.Connect() and have it return a client instance that will be used to get a collection’s documents:

When you’re adding this code to your script, be sure to replace the "SomeDatabase" and "Some Collection" strings shown in the example with the correct names for your MongoDB database and collection.

Next, we’ll nest a BSON query into another BSON map object which has one of the collection’s fields as its key:

Build a MongoDB filter query from a string in Golang

In this section, we’ll look at the process of creating a BSON map object from a string to use for a MongoDB query in Golang.

We’ll use backticks to declare a raw string of a valid JSON object in Golang; this MongoDB JSON string in Golang will be used for the filter. Then, we’ll instantiate an empty bson.M object for the unmarshaled data to be stored in:

After that, we’ll unmarshal our string and return a primitive.M object:

At this point, we’ll have the Golang driver’s Find() method return a Cursor object. Then we’ll iterate over the documents by passing a context object to the cursor’s Next() method:

Being able to construct filter queries is essential if you want to harness the power of MongoDB in your Golang scripts. Using strings and BSON map objects, it’s easy to work with MongoDB filters in Golang. With the help of the examples provided in this tutorial, you’ll have a better understanding of how to create a MongoDB filter query using BSON in Golang.

We’ve looked at our code one section at a time so far. Shown below is the entire script used to query for MongoDB documents with BSON in Golang: