How To Sort MongoDB Documents In A Collection Using Python

Written by Data Pilot
June 13, 2019
Subscribe
Like
Have a Database Problem? Speak with an Expert for Free
Get Started >>

When a call is made to query documents, MongoDB returns a pymongo.cursor.Cursor object containing data about the query’s results. This cursor object has an attribute method called sort() that allows for the sorting of MongoDB documents and the data to be iterated and organized either alphabetically or numerically, making the iteration process more efficient. When sorting MongoDB documents with Python, method calls to the collection class that returns a dictionary object, like find_one(), will not have any built-in methods like sort(). Users can test out the following examples for sorting MongoDB documents with PYMongo using Python’s IDLE environment by opening up a terminal or command prompt window and typing “idle3” for the Python 3 version of IDLE, or just “idle" for Python 2.

Note: Python 2.7 is deprecated and scheduled to lose long-term support by 2020, As such, Python 3 is recommended for executing the examples in this tutorial.

The terminal should output something that resembles the following:

Press the CTRL+C keys to exit.

How to create a collection instance from PyMongo’s MongoClient class

It is important to import PyMongo’s MongoClient class at the top of the script to create a collection object of a collection stored on the MongoDB database, as shown here:

Next, create a new client instance of MongoClient and access a database that has a collection with documents on it, as in this example:

Now access a collection’s find() method using the db object. Pass an empty dictionary ({}) to the method if you want to query all of the collection’s documents, as shown here:

How to find a MongoDB collection with documents on it

Call one of the collection class methods that return pymongo.cursor objects, like the find() or find_raw_batches() methods, and use those objects to filter and query documents.

Calling the PyMongo’s find() method and have it return a pymongo.cursor.Cursor object

All cursor objects in PyMongo should work with the sort() method. Use Python’s hasattr() function for confirmation, as shown here:

If done correctly, Python should print True to the terminal or IDLE window.

A list of the MongoDB document examples used in this tutorial

The examples in this tutorial, shown below, are from a collection made up of just six documents that contain "last name", "first name", "gender" string fields and an "age" integer field: 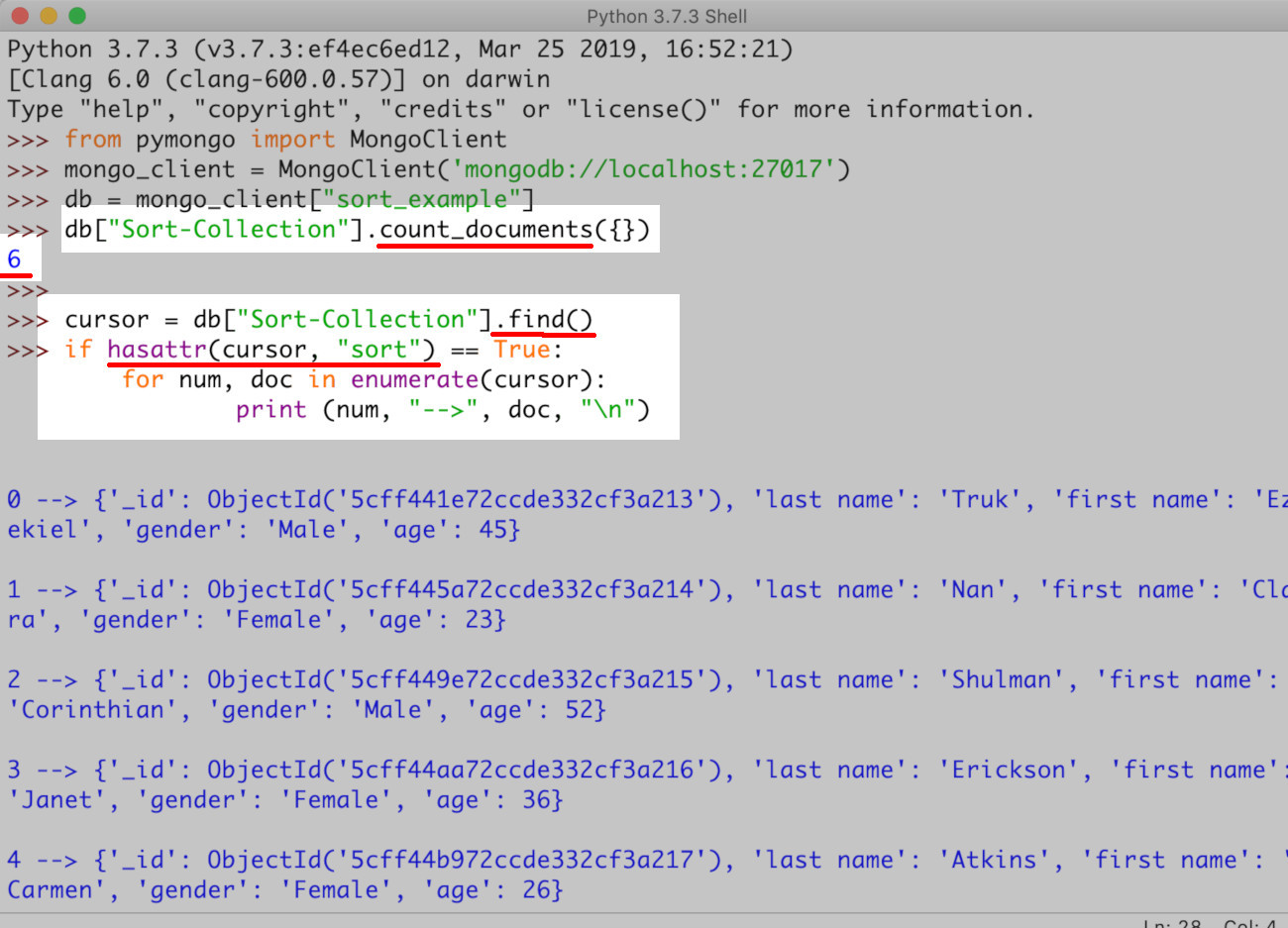 The sort method doesn’t require that a parameter for the order be passed to it. If just the field name is passed to sort(), then it will organize the data in ASCENDING order by default.

Have the find().sort() call return a cursor object so the documents can be iterated over, as shown here:

Iterate the cursor object returned by the sort() filter

The documents returned by MongoDB in the cursor object can be iterated over similar to a Python list using an iterator such as for, or using the enumerate() function, as shown here:

The document returned in each iteration should be a Python dictionary object that has the document’s fields, including its "_id" as the dict object’s keys. 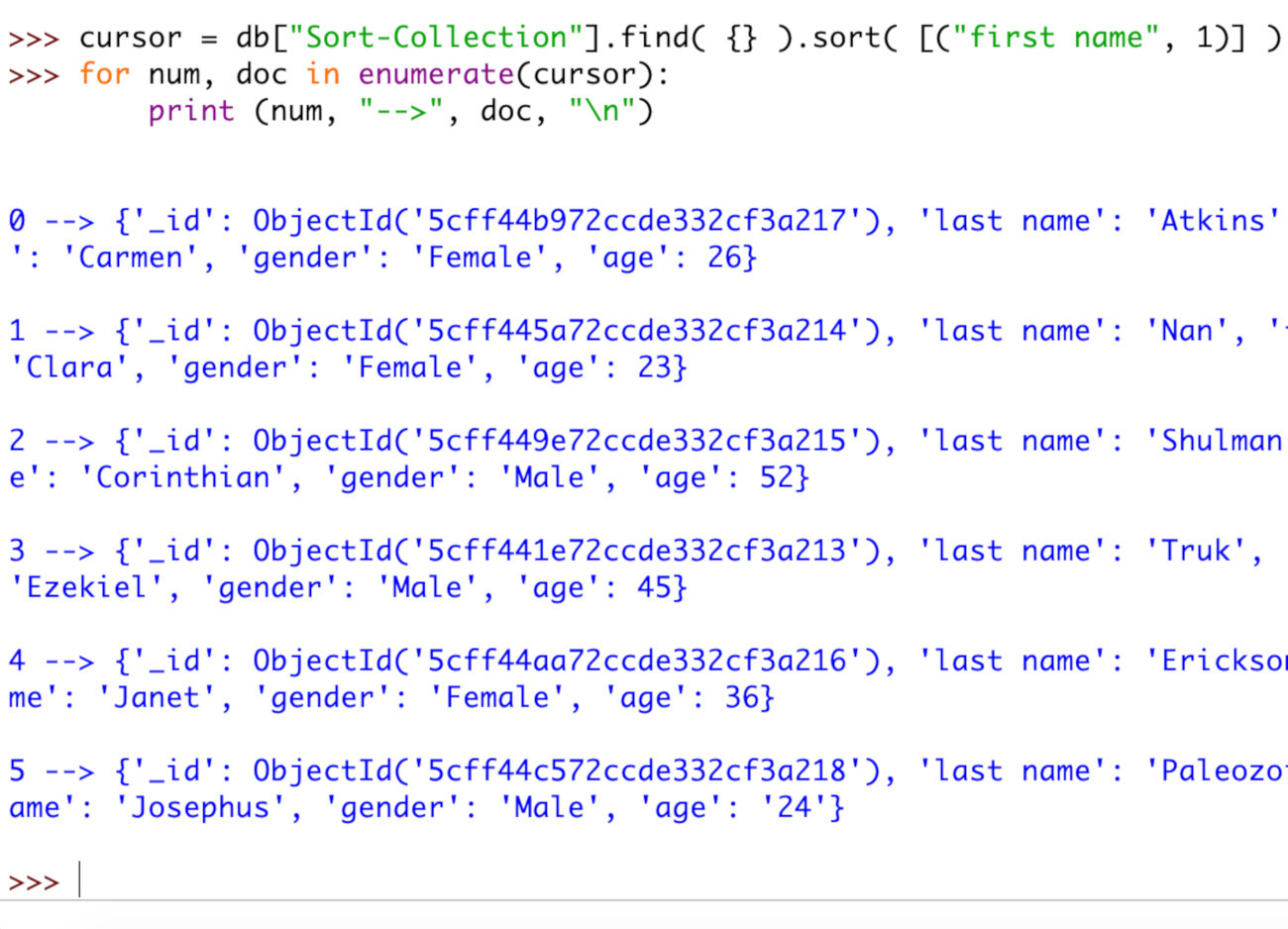 When passing more than just the field name string, a tuple object, with two values, must be passed inside of a list. If using more than one sorting parameter, then just pass another tuple inside the list. 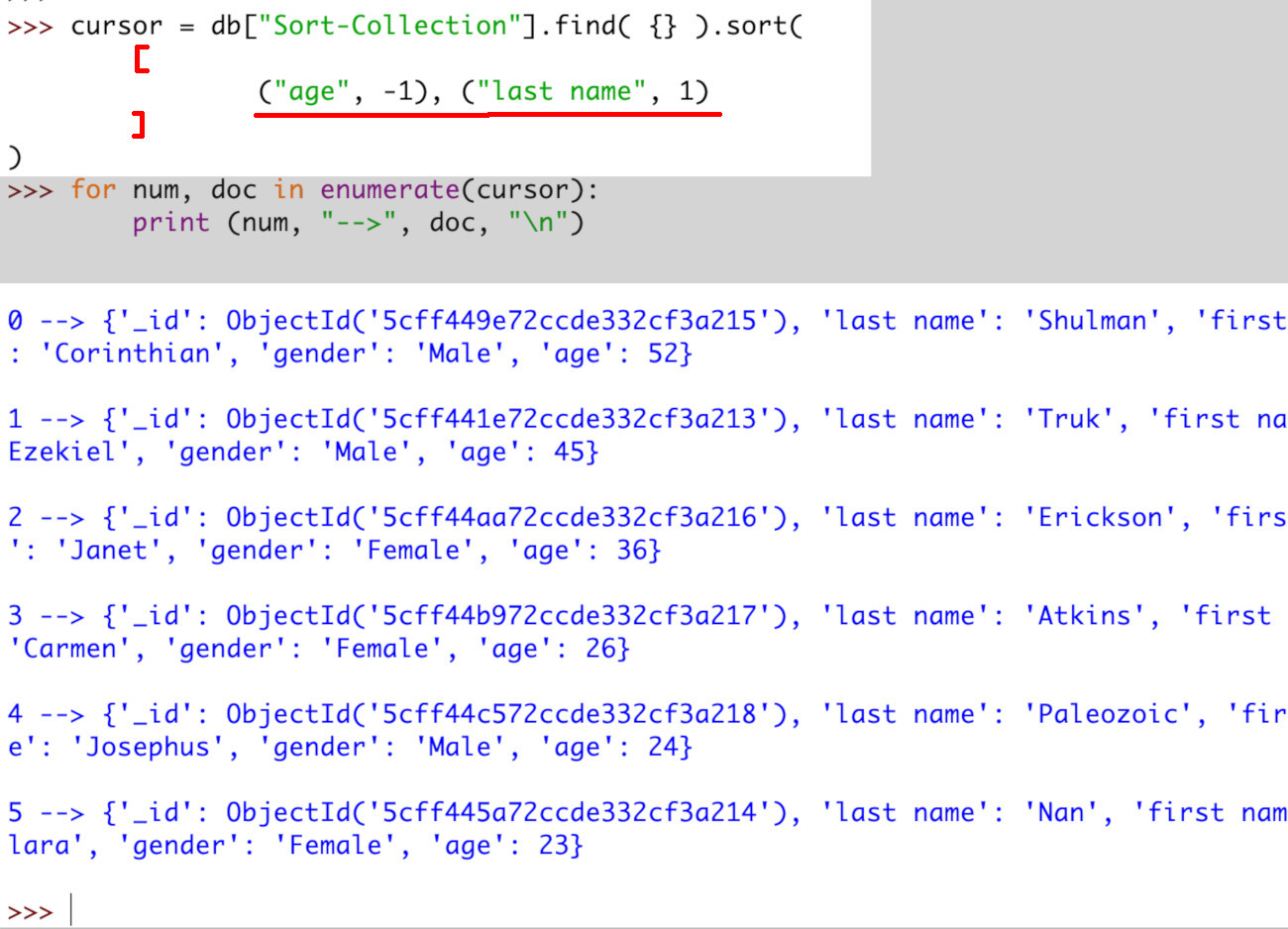 The documents returned by the Cursor iterator are just regular Python dict objects of the document’s contents. These can be inserted into a list by using the += [] operator:

If just one of the fields in just one of the documents is the wrong data type, e.g. a document has a string-type for an integer field, then the sort() method will fail to sort properly.

The PyMongo sort() method failing to sort an integer field

Below is an example of the PyMongo sort() method failing to sort an integer field because one of the document’s has the wrong data type: If the sort() method fails, first examine the document’s integer field data type to confirm that all of the documents have an integer for the data type.

Below is an example of using the PyMongo’s update_many() method, or MongoDB Compass UI, to update and fix the data: 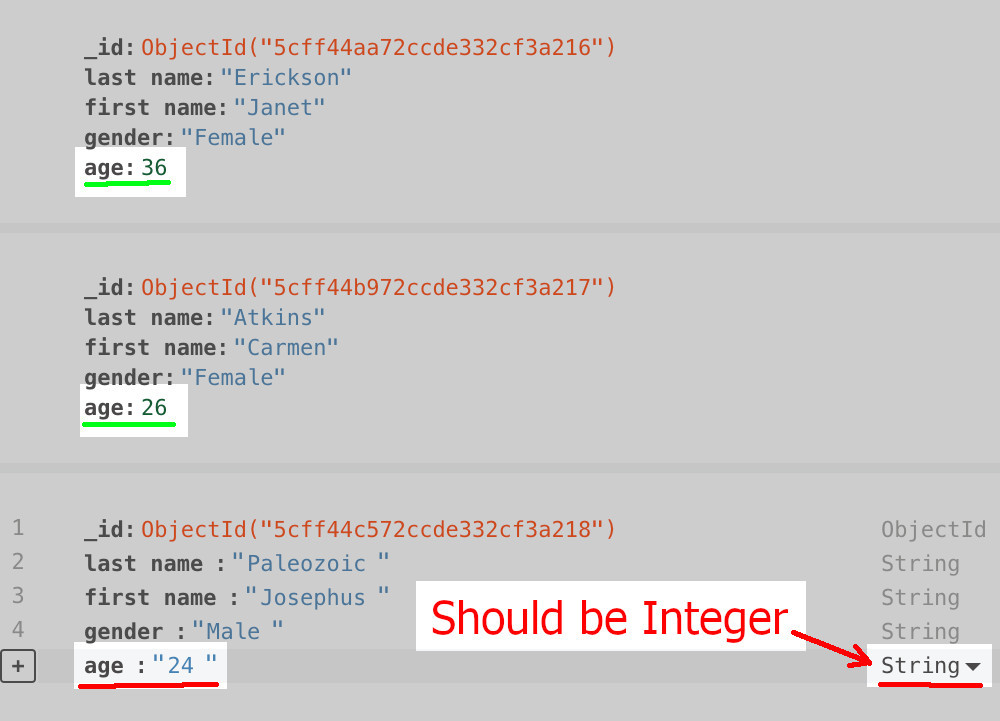 The following is an example of how to use the greater-than filter ($gt) and sort method together:

>NOTE: The number representing the second item of the tuple object passed to sort() is the sort order. The 1 is for ASCENDING and -1 is for DESCENDING order.

How to sort MongoDB documents by a field, but return a different field type

A second dictionary parameter can also be passed to the find() method and have the API call return only that data type, but still have the data sorted by another field name by calling sort().

In the below example, this API call will return just the "first name" and "_id" field data of the MongoDB collection, but it will be in descending order using the "age" integer field’s data: 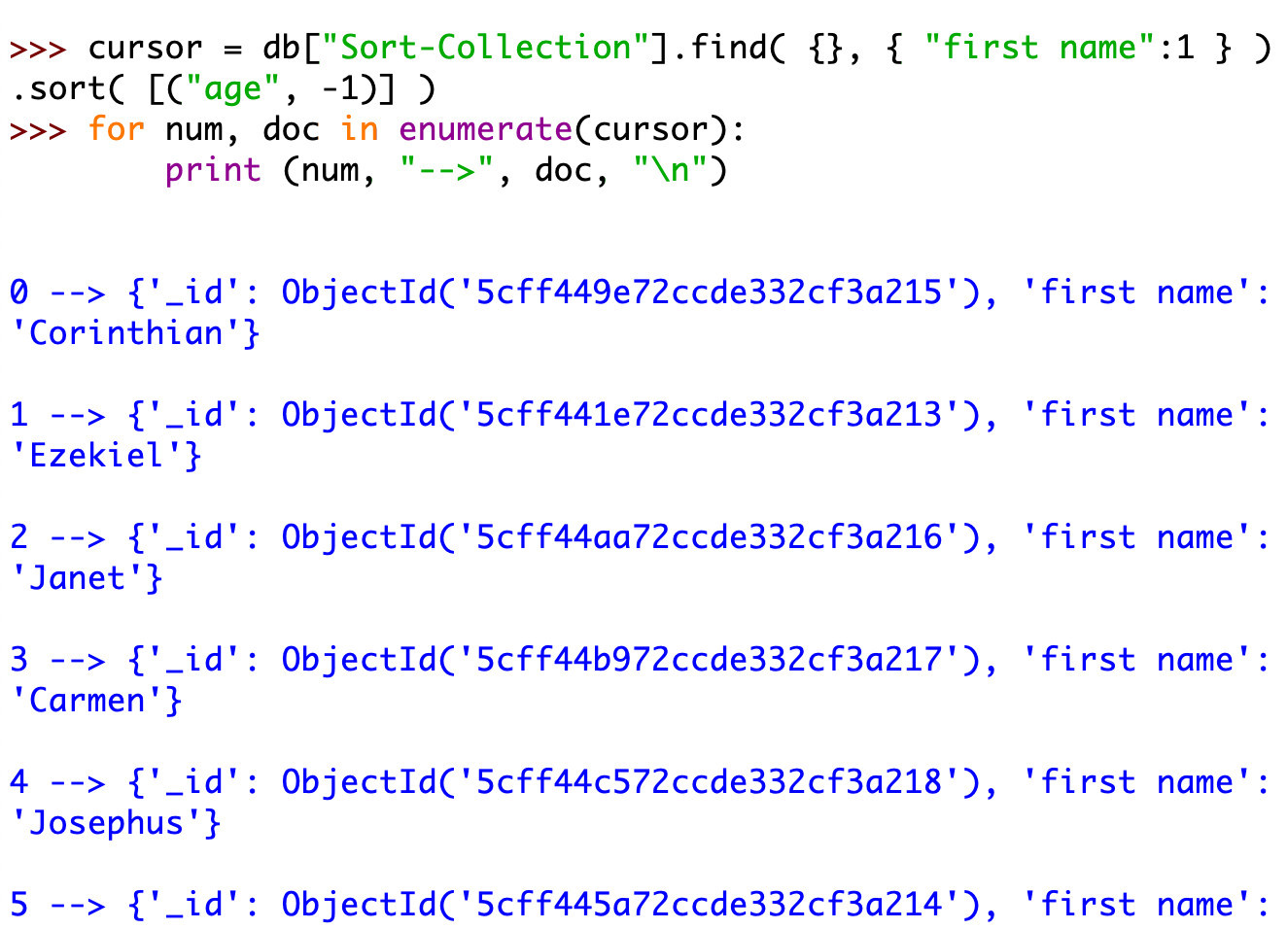 This tutorial explained how to use the PyMongo sort() method and how to pass multiple parameters for executing compound filtering and sorting of MongoDB documents. Bear in mind, when sorting MongoDB documents in Python, the sort API call will fail if the field in a document has the wrong data type. The sort method will fail to sort properly if even one of the fields in just one of the documents contains the wrong data type. The most common reason for a failure when sorting MongoDB documents with PYMongo sort method is usually tied to not all of the documents having an integer for the data type. Also remember, the number representing the second item of the tuple object passed to sort() is the sort order, with 1 for ASCENDING and -1 for DESCENDING order.