How to Save MongoDB Documents using Spring Data Part 2

Written by Data Pilot
December 11, 2019
Subscribe
Like
Have a Database Problem? Speak with an Expert for Free
Get Started >>

This is part two in the tutorial series explaining how to save MongoDB documents using Spring data. Directions were provided in part one of the series on how to configure a spring boot project with the online tool ‘Spring Initializr’ and import it as a Maven project. Part one also created Java classes for the project that will be used in this section to explain how to save a MongoDB document using spring data via ECLIPSE IDE.

The MongoDB specific annotations must be defined in order for the Java classes to work seamlessly with MongoDB. As the Hotel.java class is the aggregate route, the applied entity must have the required annotations. This is accomplished with the following code:

NOTE: The MongoDB ‘_Id’ field is an ObjectId type. MongoDB uses this, by default, to store the identifier.

With the domain set up, now add the MongoDB Repository to allow performing the SAVE operation with this application. As shown in the following screenshot, execute this by creating a new Java interface file and name it ‘ResortRepository’. 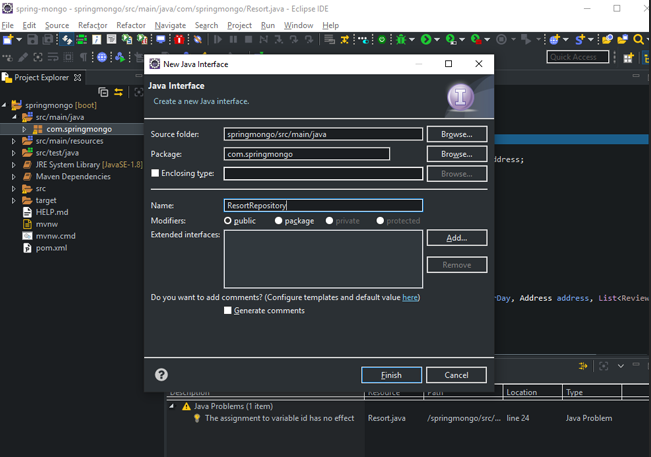 NOTE: The MongoRepository is almost identical to the JpaRepository and uses the same methods.

With the required files and configuration for the basic application established, the database can now be created using a database seeder via spring boot.

This section will cover how to populate the MongoDB database with a basic collection as a sample dataset.

This section will cover how to create the controller for the basic app.

With all of the Java classes properly configured, the database connection will be created using the spring application.properties file.

The application can now be started by simply clicking on the ECLIPSE “Run” button.

Referring to the following screenshot, it can now be confirmed via mongoshell if the initial documents, set earlier, were successfully saved within the MongoDB: Recall that the method saveAll() was used to save all of the Resort entities created previously. This section will explain how to save a just single document to a MongoDB collection.

The results should look something like the following in Mongo shell: