Contents
Introduction Prerequisites Package managers and MongoDB For Linux distros For Red Hat distros (of Linux such as Centros) Use YUM to add driver dependencies Update the APT repository for distros: Install php-pear Use PHAR to install PEAR Verify that PEAR for PHP is installed properly The pear version command entered on this macOS lists both PEAR and PHP versions. The installation packages will be installed on those versions. About Installing the MongoDB PHP Driver Install the MongoDB driver using PECL: The MongoDB driver: Configure it for a Homebrew installation of Apache and PHP: Make the MongoDB Connection with the PHP Driver Start a PHP MongoDB project Run the Script for PHP Driver Testing Installation Option: Use the Git Repository Conclusion

How to Install the MongoDB Driver for PHP

How to Install the MongoDB Driver for PHP

The power of the PHP MongoDB driver is in its script information collecting and communication abilities. That being said, installing the correct PHP driver for your macOS or Linux and other UNIX-based system is the main key to successful computer script writing. When you follow the right steps, the installation of MongoDB driver for PHP is an effortless task that you’ll find easy to accomplish.

Install MongoDB before you install the PHP driver. Try typing mongo to get into the Mongo shell server.

Now install the PHP driver after the MongoDB installation is finished.

For Red Hat distros (of Linux such as Centros)

You have the option to install MongoDB first, then PEAR and use ‘YUM’ to do that.

You can do a YUM repository update:

Use YUM to add driver dependencies

Use PHAR to install PEAR

Verify that PEAR for PHP is installed properly

The pear version command entered on this macOS lists both PEAR and PHP versions. The installation packages will be installed on those versions. 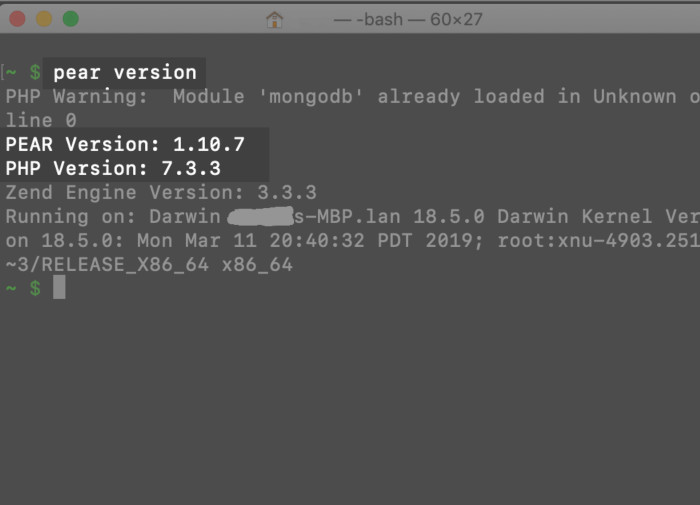 About Installing the MongoDB PHP Driver

How both Linux and macOS install the MongoDB PHP driver is somewhat the same. For installing PHP packages, they can use the PEAR and PHP-dependent PHP Extension Community Library (PECL).

>NOTE If you experience problems with the installation process, you may have an older driver. For example, PHP 5 is considered an older version. In that case, it’s not mongoDB but referred to as mongo. Try this command sudo pecl install mongo to install the driver.

The MongoDB driver: Configure it

NOTE: If you want, you can use the following commands to change the path for the configuration file.

The nano command line editor is handy for editing files. Use it or one like it to edit the PHP configuration file.

The extension=mongodb.so to the PHP .ini file: >IMPORTANT: Unlike the beginning of the other commands within the PHP configuration file, you won’t add a semi-colon (;) on the extension=mongodb.so command line. If you forget and add the semi-colon there, it will be just like the file wasn’t edited because PHP won’t read the command.

If you run into error results, there may be a conflict due to an older PHP 5 version installed on your OS. If this occurs, the best way to fix the issue is to remove the old extension from your configuration file.

MacOS: The Apache server — Restart it

for a Homebrew installation of Apache and PHP:

For the default version of Apache that comes with macOS:

Make the MongoDB Connection with the PHP Driver

>NOTE: Watch for this error message after you run the script: Fatal error: Uncaught Error: Class 'MongoDBDriverManager' not found. If you receive that error, check the configuration file for the proper wording of the extension=mongodb.so command and make sure it’s in the right file–the PHP 7 version’s php.ini file.

Installation Option: Use the Git Repository

This tutorial explained the installation of MongoDB Driver for PHP on a macOS or UNIX-like system, such as Linux. As you learned today, it can be achieved in many ways. Among those, you discovered how you can use PEAR and PECL to install MongoDB and the PHP driver. You read some tips and tricks to make the process more convenient to perform. Now that you’ve installed the MongoDB Driver for PHP, you’ll likely see a positive difference in developing all your PHP projects.