How to Install MongoDB on AWS Lightsail - Part 1

Written by Data Pilot
June 07, 2019
Subscribe
Like
Have a Database Problem? Speak with an Expert for Free
Get Started >>

In this tutorial we’ll show you step-by-step how to setup a MonoDB instance using the AWS service Lightsail. Lightsail allows you to spin up servers with operating systems of your choice and they even have installations with the whole tech stack already installed including WordPress, MEAN, and LAMP stacks. We will be creating a CentOS instance and installing MongoDB but you can pick the operating system of your choice. We’ll go through each step in detail and provide screenshots. Part 2 of this article will show you how to connect to your new MongoDB server using the graphical IDE 3T.

Spin up a CentOS Server in Lightsail

The first step is to go to AWS Lightsail. You’ll need to login with your AWS credentials to do this. You’ll see a page like below where you click the “Create Instance” button: 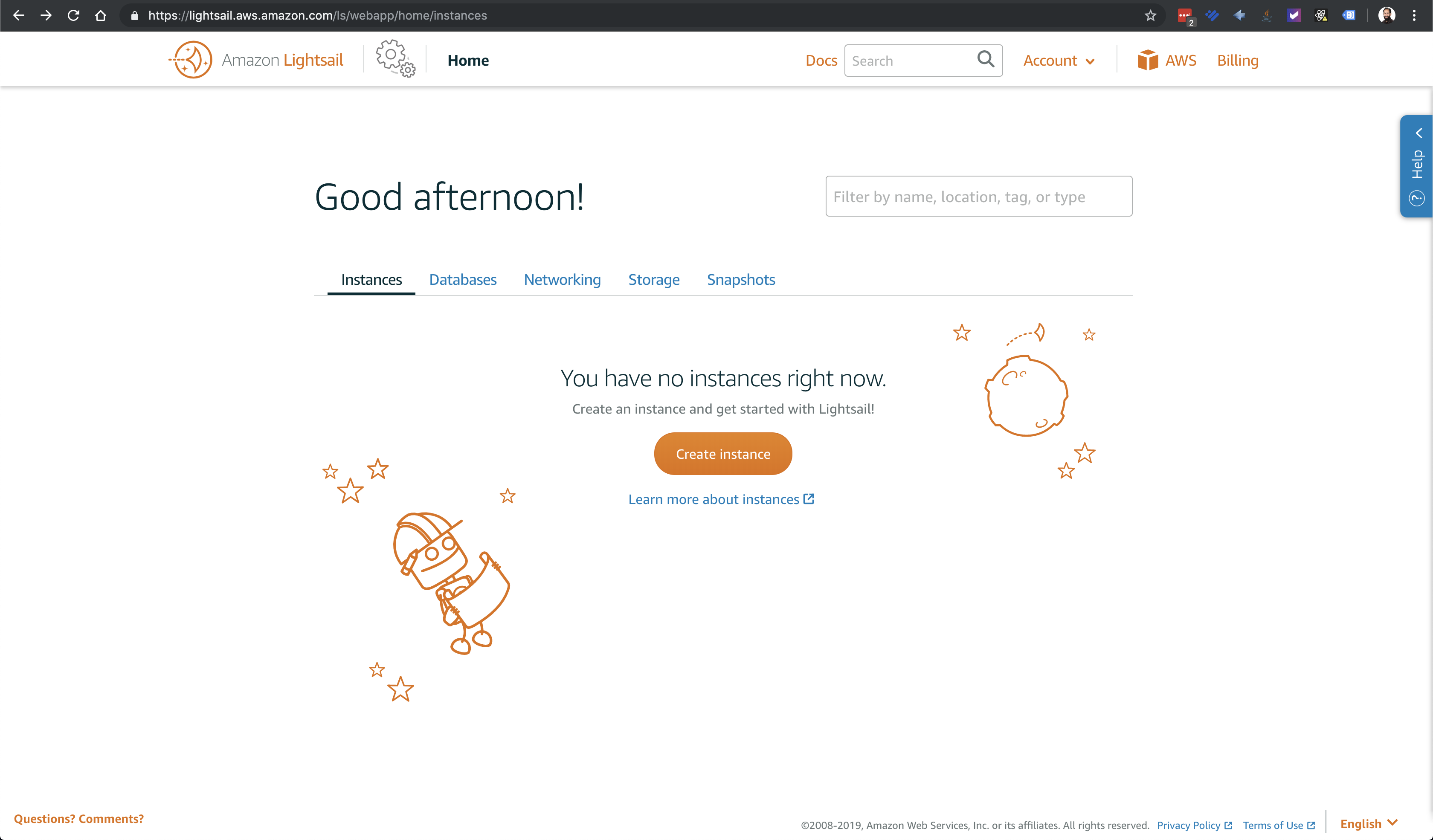 Then we selected Linux/Unix and CentOS as our operating system: Then under SSH Key Pair Manager we clicked “Create New” and you’ll receive a prompt to name your keypair:

We name ours aws_keypair then we clicked “Generate Key Pair” and then “Download Key”. We then moved our key to where we typically keep ours under our user folder ~/.ssh/aws_keypair. Under choose your instance plan we chose the one that has the free 1 month trial and then clicked “Create Instance”.

A new page will load and you should see a page similar to the following that in a few moments will let you know that your instance is Running: 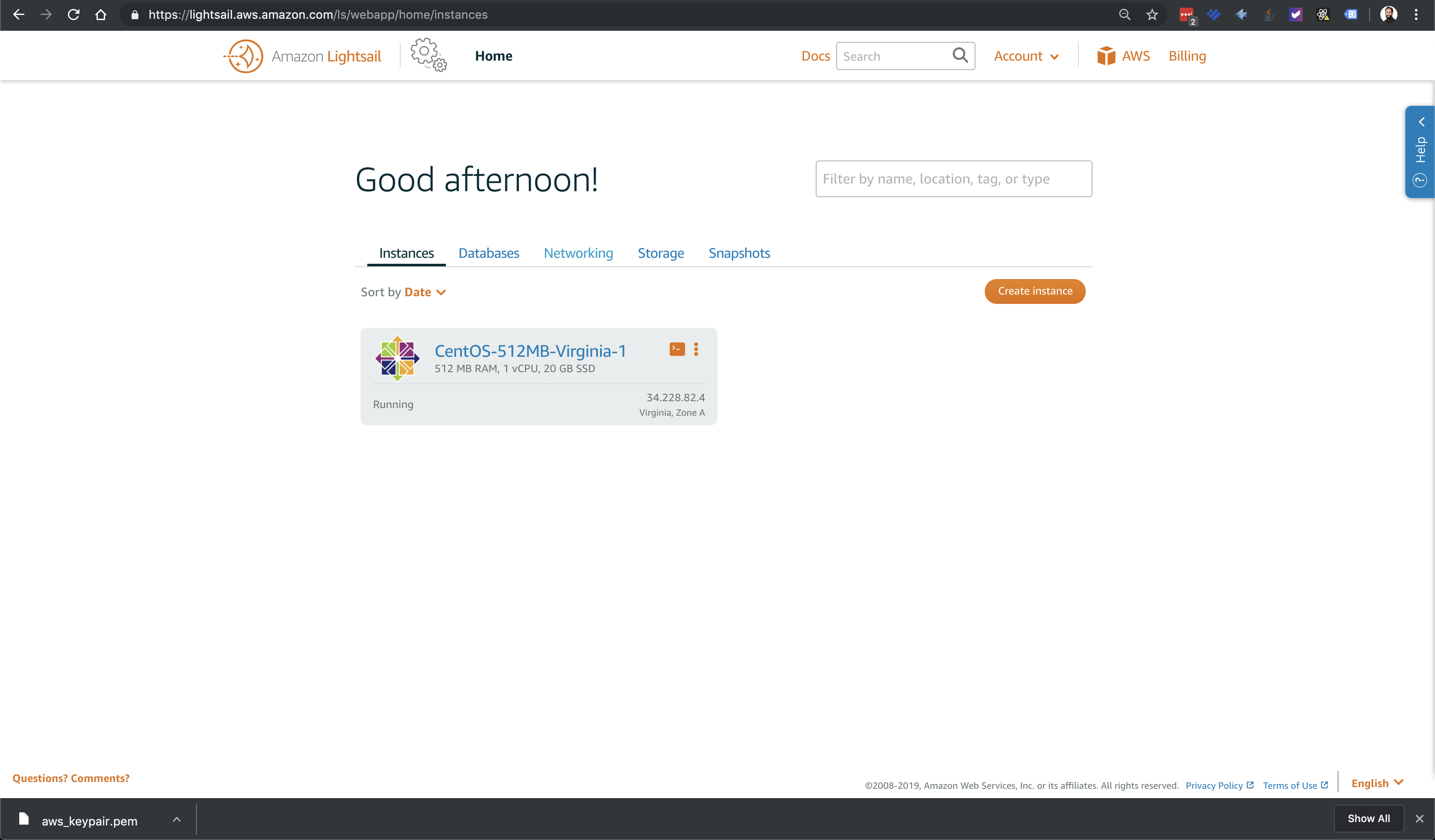 SSH Into the Instance

Now we want to SSH into our server so we can eventually install MongoDB but in order to get ssh to work first we need to change the permissions on the aws_keypair we created. In a terminal navigate to the directory where you stored the keypair and execute the following:

You should receive a response similar to below letting you know that you’re know logged into your CentOS instance as the centos user:

Installing MongoDB on the CentOS Server

Now that we have the server up and running we need to install MongoDB. To do so we’ve followed MongoDB’s official documentation and performed the following steps from the terminal ssh’d into your CentOS instance.

You’ll need to create a new file that will allow you to install MongoDB directly using the yum package manger. The file we’ll be creating is /etc/yum.repos.d/mongodb-enterprise.repo and you can create it with vi like so:

Because this file doesn’t already exist vi will create the file and open it for us for editing. It should look something like this:

First press the key i to get into “Insert Mode”. Now copy and paste the following text into that file:

Then to save and exit type :wq ( write and quit ). This will save the file and then we can install MongoDB using yum with the following command:

You’ll see a bunch of logs pass by in the terminal and you’ll receive several prompts to which you can answer y to all of them. They’ll look similar to below:

When MongoDB is successfully installed your terminal will look something like below:

Now everything from MongoDB is installed. But now we need a folder that can be used as the path to store our database data. Let’s create a mongodb directory for it with the following commands.

We make the folder writable because later we are gonna allow MongoDB to also create logs in this folder.

Now we need to make one MongoDB configuration change before we start it. By default MongoDB restricts you from connecting to MongoDB from anywhere other than localhost so we will comment out that configuration by opening up Mongos configuration file /etc/mongod.conf:

Now scroll down to the line that says bindIp: 127.0.0.1, hit i to get into “Insert Mode” and comment it out by typing a # at the beginning of the line. This is the only change we need to make and can hit Escape to exit “Insert Mode” then type :wq to write and quit.

Finally we are set to start MongoDB. Execute the following command and we’ll dissect the flags afterward:

If MongoDB started correctly you should get a response similar to below:

Now mongodb is up and running and you can start accepting connections.

In this step-by-step tutorial we showed you how to create a CentOS instance using the AWS service Lightsail. Then we learned how to log into that instance so that we could install MongoDB. We’ve done most of the grunt work in Part 1 of this tutorial but in Part 2 we’ll pick up where we left off and show you how to connect to MongoDB using an IDE called 3T that will make it easy for you to get started creating databases and viewing data. Thank you so much for joining us and we hope you follow along to Part 2 of this tutorial.

As always if you don’t want to deal with all the complexity that comes with configuring and managing databases in a production environment, please don’t hesitate to reach out to us at Object Rocket because we’d be delighted to manage your database.