How To Install And Use The MongoEngine Wrapper For PyMongo

Written by Data Pilot
June 11, 2019
Subscribe
Like
Have a Database Problem? Speak with an Expert for Free
Get Started >>

When you’re working with Python and MongoDB, you want your code to be as clean and elegant as possible. Using MongoEngine can help you write code that’s easy to read and maintain. The MongoEngine Python library is a light-weight wrapper for PyMongo, which is the Python MongoDB driver. This library allows users to update and set up JSON mapping schemas for MongoDB documents using Python dictionaries; it also has access to all of the methods and attributes of the PyMongo client library for MongoDB. In this article, we’ll show you how to install and use the MongoEngine wrapper for PyMongo.

Before we dive into the example code, let’s take a moment to go over the prerequisites for this task. There are a few key system requirements that must be met:

>NOTE: MongoEngine requires that pymongo v3.5 or above be installed.

Install the MongoEngine wrapper for PyMongo

Now that we’ve set up all the system requirements, we can move forward with installing MongoEngine. You can use Python’s PIP installer to install the MongoEngine library. Use the -U flag to upgrade the package, if possible:

Use the pip command instead if you’re installing MongoEngine for Python 2:

Check the version of PyMongo and MongoEngine

You can use the following code to get the installed version of the PyMongo low-level client library:

Similarly, you can access the __version__ attribute of the mongoengine class to check MongoEngine’s version:

Be sure to import Python’s datetime library if you plan to create a document class using MongoEngine’s DateTimeField:

After we include all our necessary import statements, we can use MongoEngine’s connect() method to connect to the MongoClient class just like we would with the PyMongo library:

>NOTE: By default, MongoEngine uses the project name as the name of the database. Be sure that the name you pass to the the connect() method doesn’t have any spaces or other characters that are invalid for MongoDB database names. If the name contains an invalid character, you’ll get a pymongo.errors.InvalidName exception when you try to index documents using MongoEngine.

For the connect() method, the first parameter is the name of the database on the MongoDB server, and the other host and port parameters are optional. If nothing is passed to the optional parameters, MongoEngine will connect to http://localhost:27017 by default. You can use the connect() method to create multiple instances of database clients and organize them by aliases. This is accomplished by passing an alias option to connect():

Be sure to register the alias using mongoengine.register_connection(), as shown below:

Define a MongoEngine model for a MongoDB document

Let’s look at an example class that creates a document with both a string field and a MongoDB array:

In MongoEngine, subclasses are used to create new MongoDB document fields. To do this, simply pass the class name of the collection when you construct a new subclass for the field. Let’s take a look at an example that creates a UUID field for the collection’s documents:

Next, let’s create a new instance of the CollectionName class, which we’ll use to create a new document instance. Be sure to pass all the appropriate data to the class’s parameters:

With this code in place, a new document will be inserted every time the script is run. 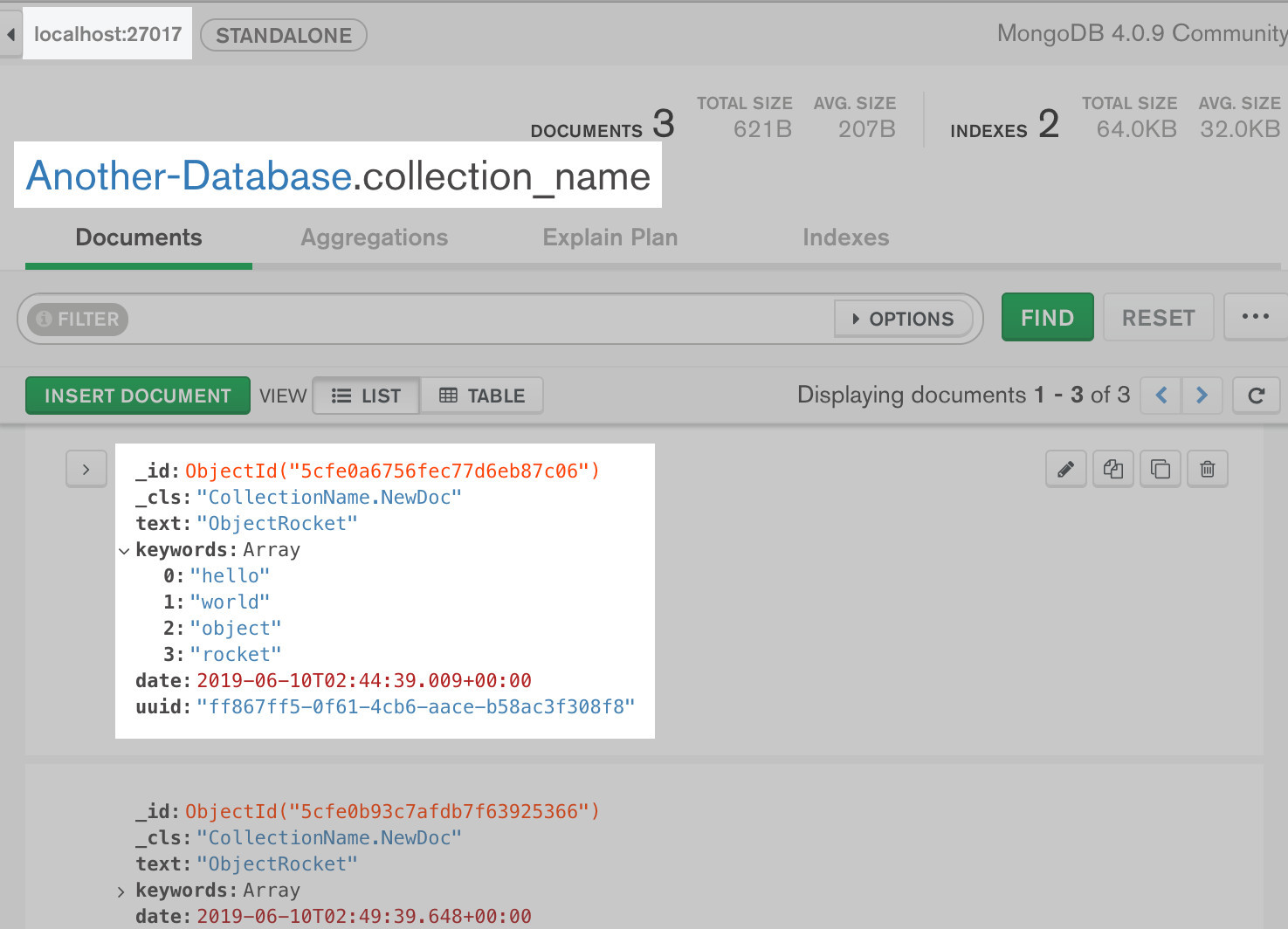 Each MongoEngine collection class has an object attribute, and that attribute has several methods and attributes of its own. We can use the filter() method for querying MongoDB documents:

The filter() method returns a list of the CollectionName class’s attributes—- each one represents a document that matches the query criteria. If no document matches are found, the method returns just an empty list ([]).

You can use either for or enumerate() to iterate over a MongoEngine class instance, and the attributes of each document can be accessed during the iteration:

An individual document instance can also be accessed directly from the list of returned documents:

Python’s setattr() function can be used to change the values of the class instance object. This comes in handy for writing custom functions to update MongoDB documents using MongoEngine. Let’s look at an example:

When you make changes, be sure to call the save() method so that the document gets updated on the MongoDB server:

Although PyMongo offers a quick and efficient way to interact with MongoDB in a Python script, there are times when an additional layer of abstraction would make it a bit easier to write clean, easy-to-maintain code. That’s where MongoEngine comes into play, acting as a wrapper on top of PyMongo and allowing you to define schemas for your document data. With the instructions provided in this tutorial, you’ll be ready to install and use MongoEngine in your own Python scripts.

Throughout this article, we’ve looked at the code section by section. The complete Python script is shown below: