How To Drop A MongoDB Collection's Index Using The Golang Driver

If you want to optimize the performance of your MongoDB queries, it’s a good idea to use indexes on your collections. Indexes make queries run faster by storing data in an efficient way that’s quick to traverse. When a collection has an index, MongoDB can easily round up the documents that match a given query’s criteria without resorting to a complete collection scan. You’ll probably run into situations when you need to drop an index that you’ve created. In this article, we’ll show you how to to drop MongoDB indexes with Golang.

Prerequisites for creating a MongoDB index in Golang

Before we get started with the code we’ll need to drop an index, let’s take a look at some of the prerequisites that need to be in place for this tutorial: MongoDB needs to be running. You can type mongo in a terminal window to enter the Mongo Shell and confirm that the service is running. The Golang language must be installed on the same machine that’s running MongoDB, and the $GOPATH directory for the Golang projects must also be set. * The official Golang driver for MongoDB, mongo-go-driver, must be installed on the machine’s $GOPATH:

When you’re writing code that uses the mongo-go-driver to drop an index, there are certain errors you may encounter. Let’s look at a few common errors associated with mongo-go-driver:

Make sure to confirm that the MongoDB index exists, and get its exact name, to avoid the Golang driver’s (IndexNotFound) error: 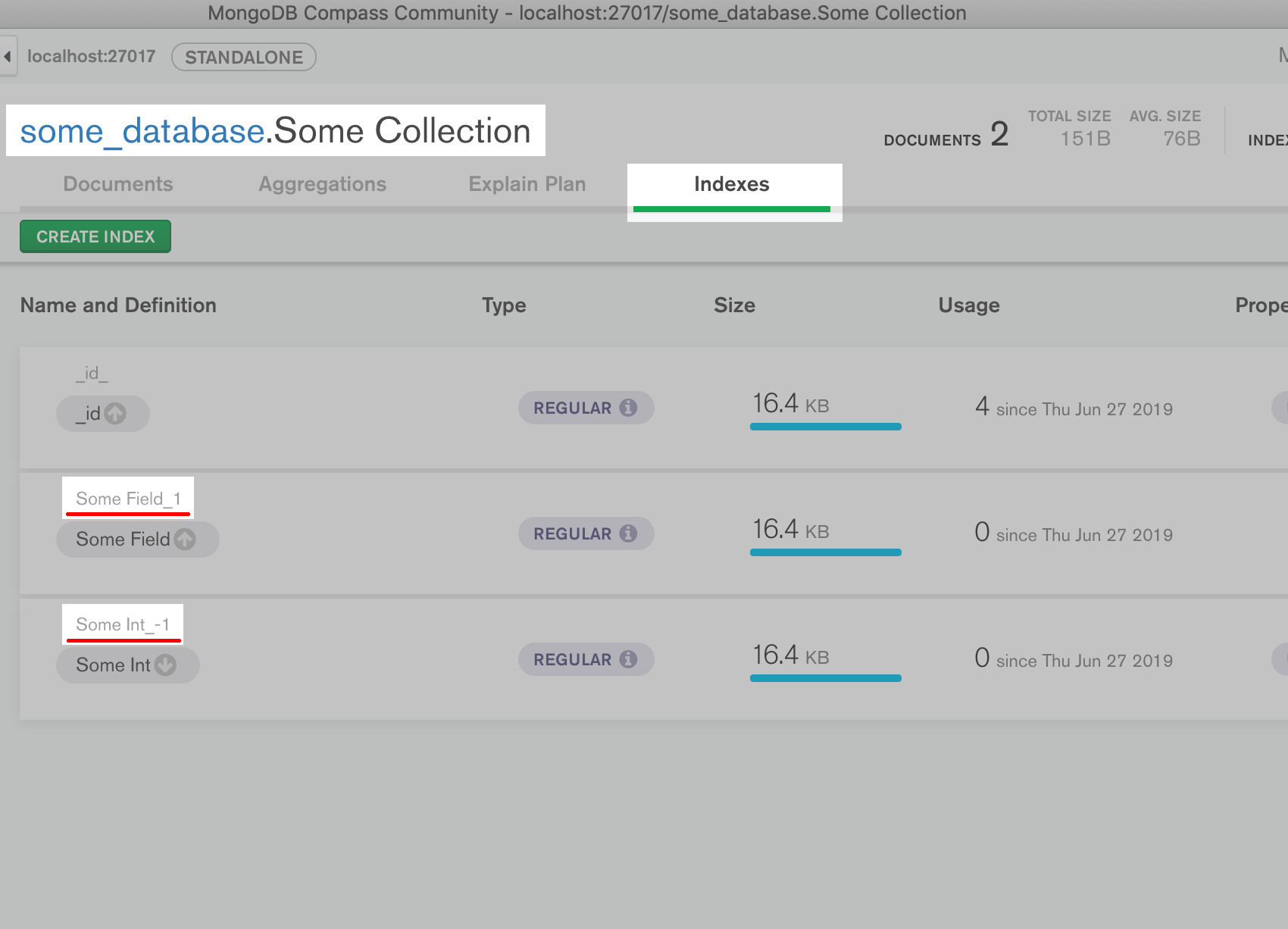 Now that we’ve taken care of the prerequisites and discussed some potential errors that may occur, we’re ready to focus on writing code. Let’s start off by creating a new Golang script. You can use the touch command or a text editor like Vim or Nano if you’re compiling and running the script on a server. Make sure that the Golang file is in your system’s $GOPATH.

Next, we’ll use Golang’s import statement to import both the Golang and MongoDB packages needed to create an index:

After you’ve got all your import statements in place, you can use func to declare the main() function, which is where all of the MongoDB API calls will occur:

Connect to MongoDB in Golang

We’ll need to have an options.Client() instance that will be used to create a new connection to MongoDB. When you create this instance, be sure to change the host and port URI string to match your server’s domain and MongoDB settings:

Now we’ll pass the clientOptions instance to the mongo.Connect() method. Make sure to also pass a context.TODO() object to it:

Create a Context object to manage the MongoDB API calls

In this step, we’ll be using the time package and creating a new context instance, which can be used to manage multiple API calls:

At this point, we’re ready to create a new MongoDB collection instance. It’s important to make sure you’re passing the correct collection and database string names to the methods:

Declare a Golang string for the MongoDB index name

Let’s declare a string for the target index name that we’d like to drop:

We’ll call the collection’s Indexes().DropOne() method and have the API call return a bson.Raw result object:

Check if the DropOne() method returned any errors

We can use log or a function like fmt.Println() to print out any API errors returned by the Golang driver. If no errors occurred, this code will print out the bson.Raw result:

If you’re managing your data with MongoDB, you’ll probably want to make use of indexes to optimize performance. In some cases, you’ll need to drop one of these indexes from a collection. Fortunately, it’s easy to delete a MongoDB index in Golang with just a bit of simple code. Just follow along with the examples provided in this article, and you’ll be prepared to drop any MongoDB index if needed.

The Golang script shown below represents all of this tutorial’s example code in its entirety: