How to connect Python to MongoDB

Written by Data Pilot
May 02, 2019
Subscribe
Like
Have a Database Problem? Speak with an Expert for Free
Get Started >>

If you’re working with data stored in MongoDB, you’ll probably need to access the database from Python. Luckily the MongoDB client library makes this task a simple one, allowing you to connect to MongoDB with just a few lines of code. In this step-by-step tutorial, we’ll explain how to connect Python to MongoDB using the pymongo client library.

Before we look at any code, it’s important to make sure certain prerequisites are in place. For this task, there are a few key system requirements:

Once you’ve confirmed that all the system requirements are in place, it’s time to install the pymongo client library for MongoDB. Run one of the following commands, depending on which version of Python is running on your machine:

Connect to the MongoDB server

On most Linux servers, you can use the service command to start and stop the mongod server:

On macOS, you can use the list command to confirm that MongoDB was installed using Homebrew:

After you’ve confirmed that the MongoDB server is running, you can use the mongo command to enter the Mongo shell:

Adding the --port option allows you to specify the port that MongoDB runs on (the default value for this is 27017):

Connect to the Elasticsearch cluster with a client instance

If the pymongo Python module was installed properly, then you should be able to import it without receiving an ImportError. Open the Python 3 interpreter in the terminal or command prompt by typing python3, and try to import the module:

Try to import the pymongo module:

Use Python’s IDLE environment to import and test the MongoDB client module: Create a working environment for the pymongo script:

If you don’t already have a script to work with, your next step will be to create a Python script in the HTTP server’s web root directory (usually located at /var/www/html for Apache servers, or the /Volumes directory for a macOS localhost server).

In a UNIX-based terminal, use the touch command to create a new Python script. You can name the script whatever you want, but it needs to have the .py file extension. Our example script will be named mongo_test.py:

NOTE: Every programming language has its own unique naming conventions. For Python, script names are generally in lowercase, with underscores (_) instead of hyphens (-) between words.

Edit the Python script and connect to the MongoDB server

Now that you’ve created a Python script, you can edit it and import the MongoClient class from the pymongo MongoDB library at the beginning of the Python script:

Create a class instance of the MongoDB client:

Next, we’ll instantiate a new client that can be used to make RESTFul API calls:

A Mongo database is represented as a method of the client object, and it can be instantiated in a couple different ways:

In both examples, the code is accessing the database sub-collection of the pymongo.database class. 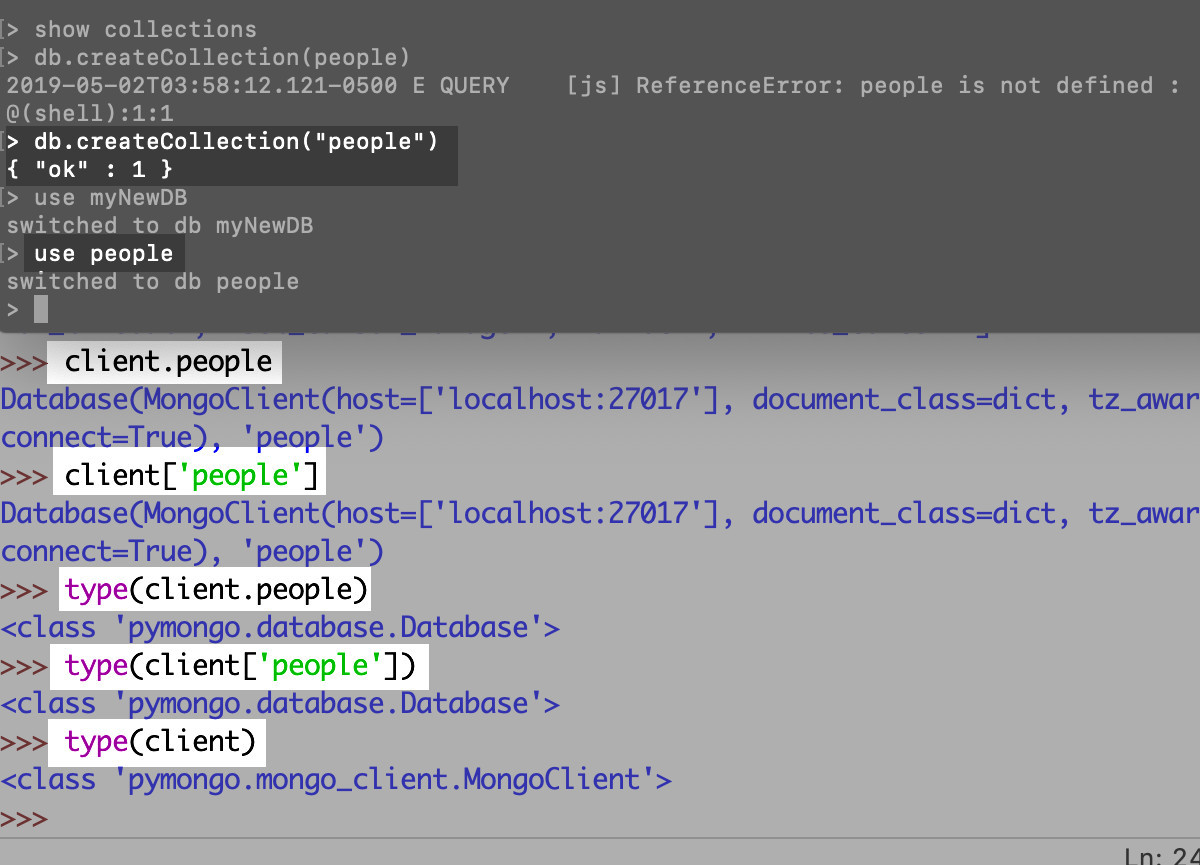 Python is a popular programming language, and it’s important to be able to connect to Mongo and access your database from a Python script. With the pymongo client library, accomplishing this task is quick and easy. Using the instructions provided in this article, you’ll have no trouble connecting to MongoDB using Python.

In our tutorial, we looked at the code one section at a time. The complete Python script needed to connect to Mongo and the server’s databases can be seen below: