Introduction to insertMany() in PyMongo

If you’re using MongoDB to store data, there will be times when you want to insert multiple documents into a collection at once. It’s easy to accomplish this task with Python when you use the collection.insert_many() method. This useful method is PyMongo’s version of the insertMany() method; both methods can be used to insert more than one document at a time. In this article, we’ll show how to use the PyMongo bulk insert method to index MongoDB documents in Python.

Before we look at any Python code, it’s important to review the prerequisites for the task. There are a few key system requirements to consider:

Once you’ve made sure that all the system requirements are in place, it’s time to dive into the Python code. The first step is to import the MongoClient class, and create a new client instance of the driver:

At this point, you can also import any other Python libraries or modules that may be necessary; for example, we’ll import the JSON library for Python that can be used to create JSON strings or to parse JSON strings using its json.loads() method:

All of the libraries shown above come included with the Python installation, so there’s no need to install any of them with PIP.

In Python, a dictionary object acts as the equivalent of a JSON or BSON MongoDB document. This basic data structure can easily be created using curly brackets {}, as in the following example:

Dictionaries can be constructed on a single line, like in the following example:

If the dictionary is going to be quite long, or if it contains lengthy strings, it’s helpful to use multiple lines when declaring the key-value pairs:

Adding the MongoDB documents to a list to be inserted later

The PyMongo insert_one() method only needs a single dict type object be passed to it during the API call, but the insert_many() method requires that the dictionary objects be nested inside a Python list ([]) for the method call to work. Just passing a single dictionary to the method will result in a TypeError exception. Here’s an example of what not to do: 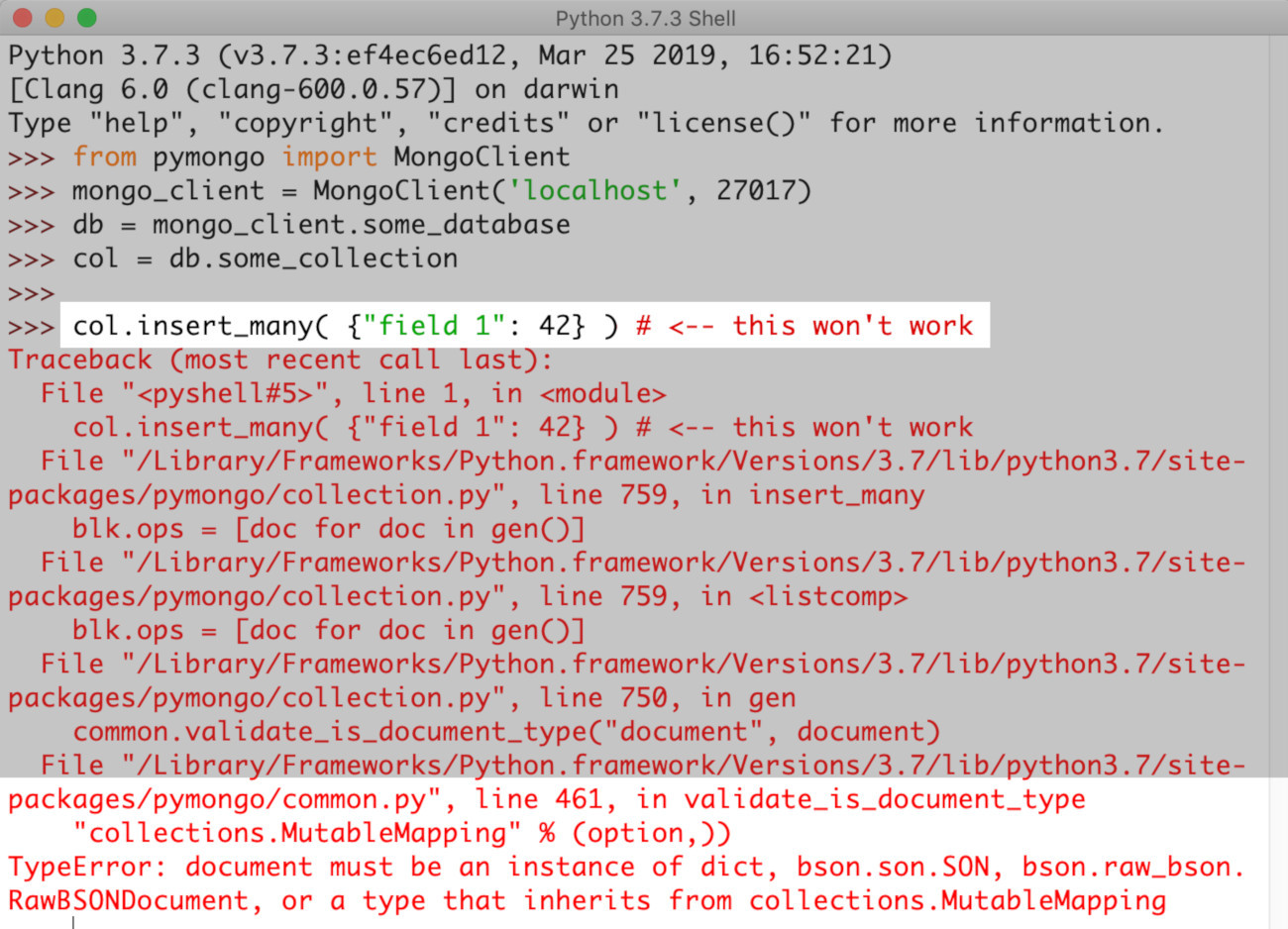 Put the MongoDB document dictionary objects into a Python list

There are different ways to append, index, or put items into a Python dictionary. Our next examples will illustrate these different options.

You can use the += operator to append an element to a list object. Be sure to enclose the MongoDB document object in square brackets, as seen in the example below:

The append() method for List-type objects can also be used to add an element to the end of a Python list:

The insert() method (which is not to be confused with the MongoDB Collection’s insert() method), however, is a bit different from the two previous methods we saw. With insert(), you can specify the position in the list where you want to insert the item. This method requires two arguments to be passed—- the first must be an integer representing the index location where the object will be inserted, and the second is the object itself:

If the integer value passed to the insert() method’s index parameter exceeds the number of elements in the list, then the object will simply be indexed as the last element in the list.

Declare the MongoDB documents and the list at the same time

In addition to all of the options we’ve just reviewed, another option is to declare the MongoDB document dictionaries and the list at the same time. To accomplish this, we just pass it all into the method call at once, as shown below:

The list object is now ready to be passed to the PyMongo insert many method.

Now that we’ve seen how to add a MongoDB document to a list, let’s look at an example of how to iterate over an existing list of values in order to create another Python list comprised of MongoDB documents.

We’ll assume that there was a list of various fruits in the form of a Python list, and these fruits needed to be inserted into a MongoDB collection as documents:

First, we’ll need to create another empty list. This will serve both as the container for the documents, and as the parameter to be passed in the method call:

Next, we’ll use that list of fruits to build a new list of MongoDB dictionary objects by creating a new dictionary object with each iteration. We could just use a simple for loop, but the enumerate() function is more efficient:

Pass objects, like datetime.now(), to the MongoDB dictionary document

You can add more key-value pairs to a Python dictionary to give the MongoDB documents more content. In the following example, we’ll create a random integer (using the random.randint() method call) to generate some additional data for the fruit. We’ll use a random choice of either 0 or 1 to determine if each fruit is labeled as “good” or “bad, then we’ll use the value of datetime.now() to create a timestamp for the fruit. Finally, we’ll create a UUID for each fruit:

The final step is to put the dictionary object into the mongo_docs list that we created earlier, and then pass that list to the insert_many() method once we finish iterating over the fruits list:

Iterate over a list of items, call the PyMongo bulk index method insert_many(), and verify the inserted documents in MongoDB Compass 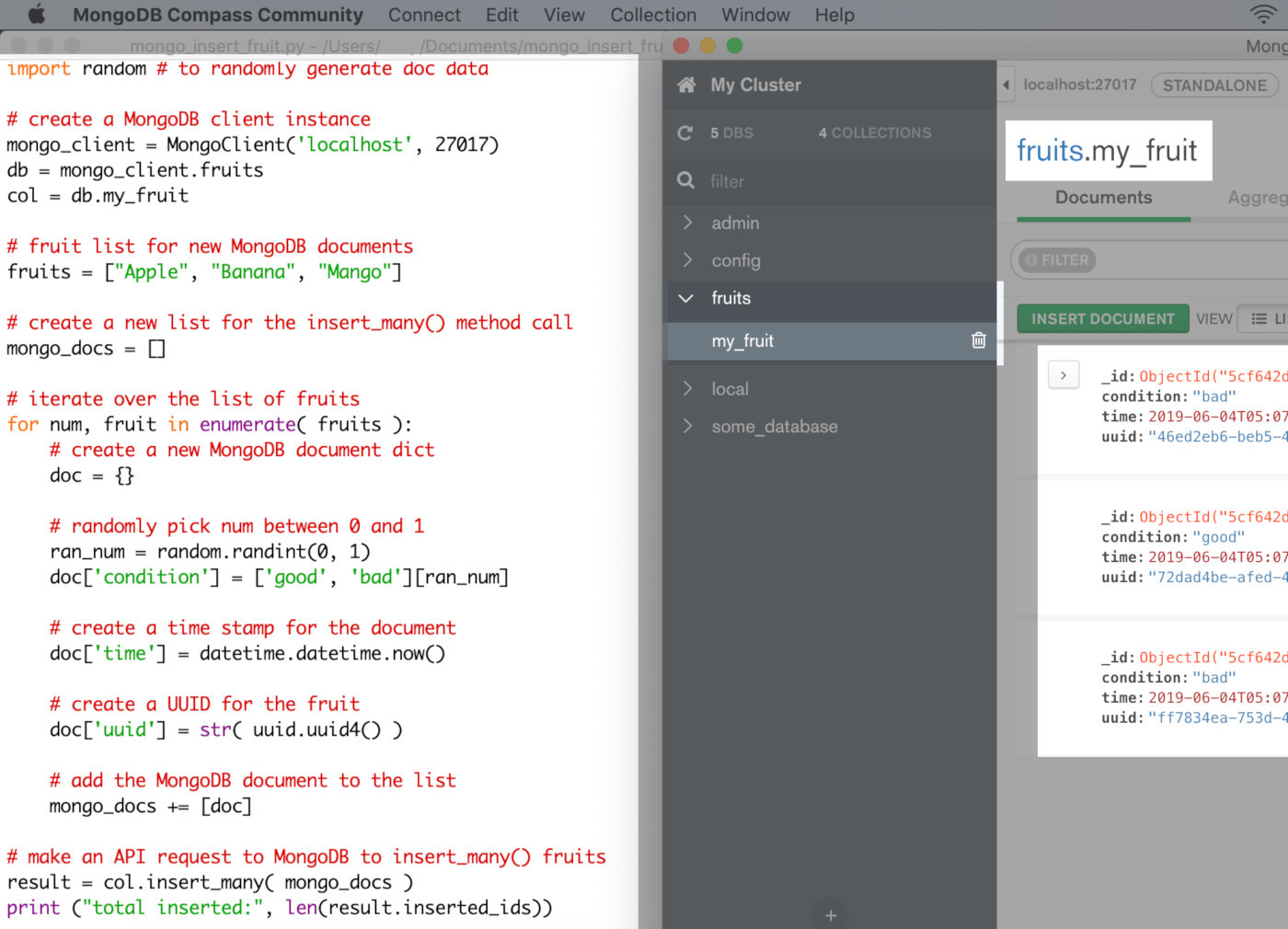 Create a MongoDB document list from a JSON string

If your script is running on the server side of a website, a more common way to build a list of MongoDB dictionary objects would be by parsing an HTTP message string. The Python JSON library makes this task simple, as we’ll see in the next example.

For this example, we’ll assume the client made an HTTP request to the MongoDB server and the message request came in the form of a JSON string, which will be indexed as MongoDB documents:

At first, this string looks a bit difficult to parse. Fortunately, the json.loads() method call can convert that JSON string into a Python dictionary that can then be inserted into a MongoDB collection:

If the method call to json.loads() doesn’t raise any exceptions, it means that the returned object is a Python dictionary. This dictionary can then be parsed and finally passed to the PyMongo index_many() method:

Using a JSON string and PyMongo to insert_many() documents, and then verify the insertion with MongoDB Compass 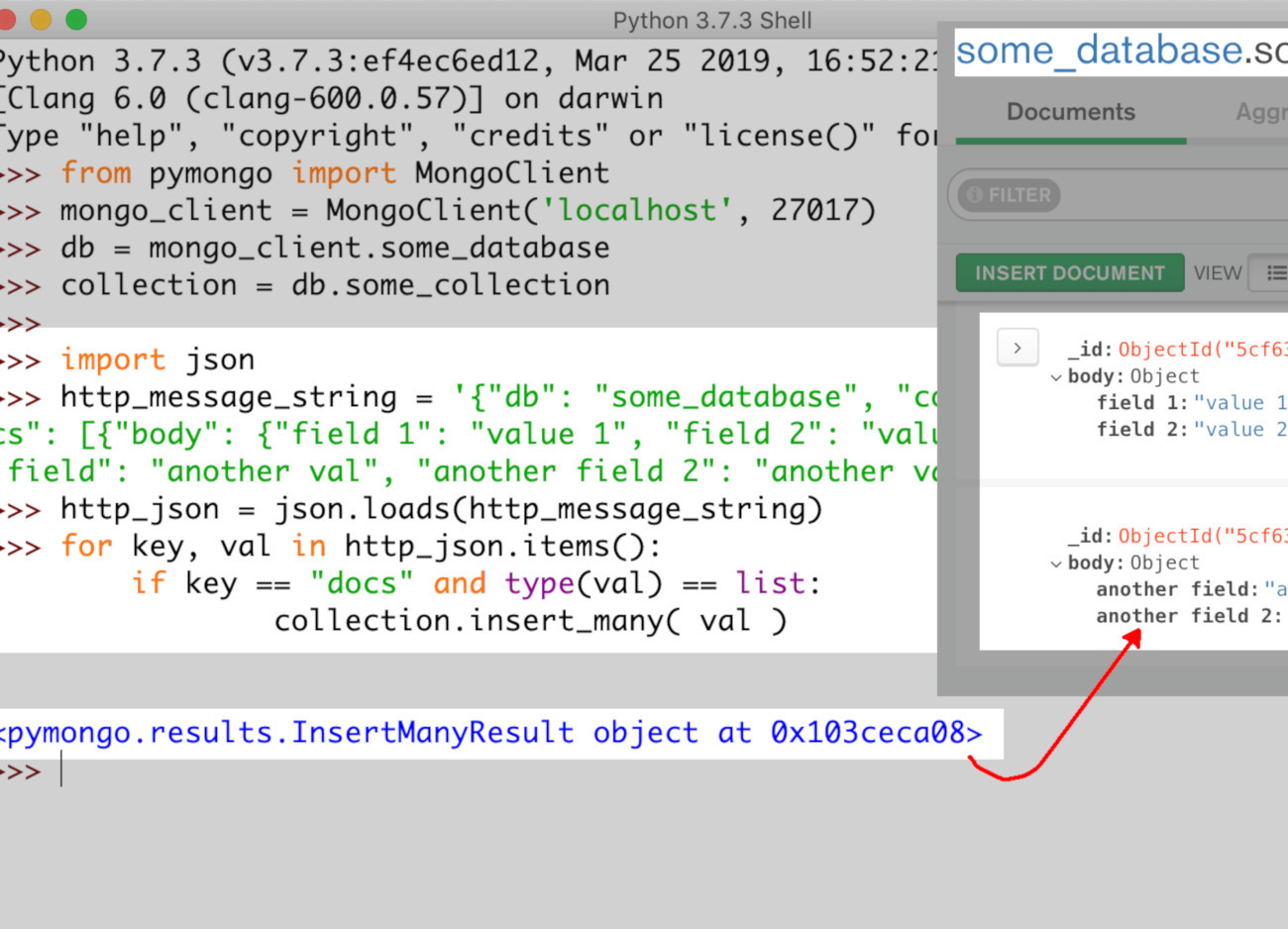 The PyMongo API call can also return a pymongo.results.InsertManyResult object. This helps you verify that the insertion was successful, and gives you more information on what changes were made to the MongoDB collection.

To get this information, have the method call return an object when calling it:

Then, take the returned result object and access its various attributes. One attribute is the inserted_ids list, which lists all the IDs that were created for the documents upon insertion. Use Python’s len() function to see the total number of documents inserted:

When you need to insert a batch of documents into a MongoDB collection, creating a Python script is a good way to get the job done. The PyMongo driver makes it easy to bulk insert MongoDB documents with Python. With the step-by-step instructions provided in this article, you’ll have no trouble performing a MongoDB bulk insert in a Python script.

Throughout this article, we examined the code one section at a time. The following Python script contains all of the examples in this article and can be used to insert_many() MongoDB documents into a collection: