How To Access And Parse MongoDB Documents In Python

Written by Data Pilot
June 03, 2019
Subscribe
Like
Have a Database Problem? Speak with an Expert for Free
Get Started >>

If you’re a Python developer and planning to work with MongoDB, it’s important to know how to handle the results of a query. When you query a collection of documents with PyMongo, you’ll receive results in the form of a Python dictionary. It’s actually quite easy to access these MongoDB documents in Python and examine each one individually. In this article, we’ll learn how to iterate through MongoDB documents that are returned from a query and parse each document’s field and values.

It’s important to review the list of system requirements needed for this tutorial before we jump into the Python code. There are a few key prerequisites to keep in mind:

Connect to the MongoDB Server using the MongoClient class in Python

Now that we’ve reviewed the prerequisites, we’re ready to focus on the code. First, we’ll import the MongoClient class and create a new client instance of the driver:

We’ll be using the mongo_client object to make method calls to a MongoDB database and its collections.

The MongoDB API doesn’t raise any kind of Python AttributeError if the database or collection you specify doesn’t exist.

If either the database or the collection do not exist, they will be implicitly created at the time of an API call. You can verify this in the MongoDB shell.

Access the Collection attribute of the MongoDB database instance

This Collection object (col) will be used going forward to make API requests to the MongoDB server to retrieve the collection’s documents.

Each document returned by the API call is actually a Python dictionary object, with each one having its own ObjectId attribute as well as any custom field values that were created when the document was inserted.

The document’s key-value pairs can be accessed just like they would in any Python dictionary. For example, to get the document’s _id you just have to access the dictionary’s "_id" key: 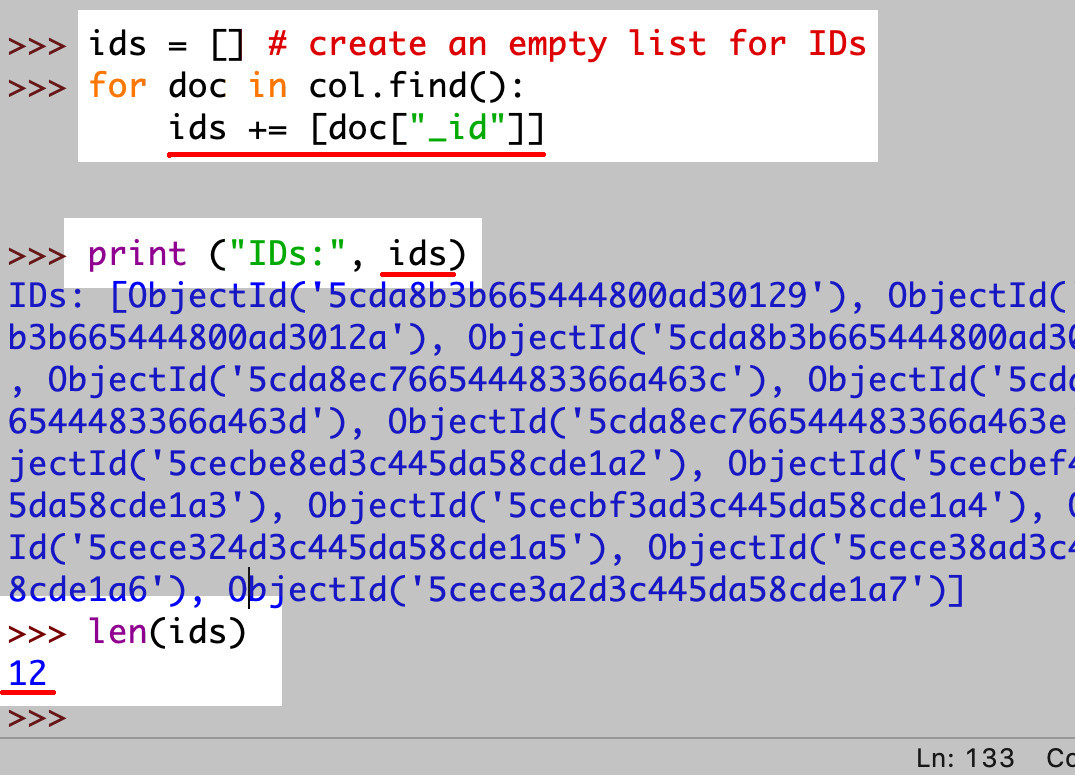 Get all attributes of a MongoDB collection object in Python

You can use Python’s built-in dir() function to return a list of all the collection object’s attributes:

You’ll see in the following screenshot that several of the methods begin with the word "find". Any method that starts with "find" can be used to query the collection’s documents. 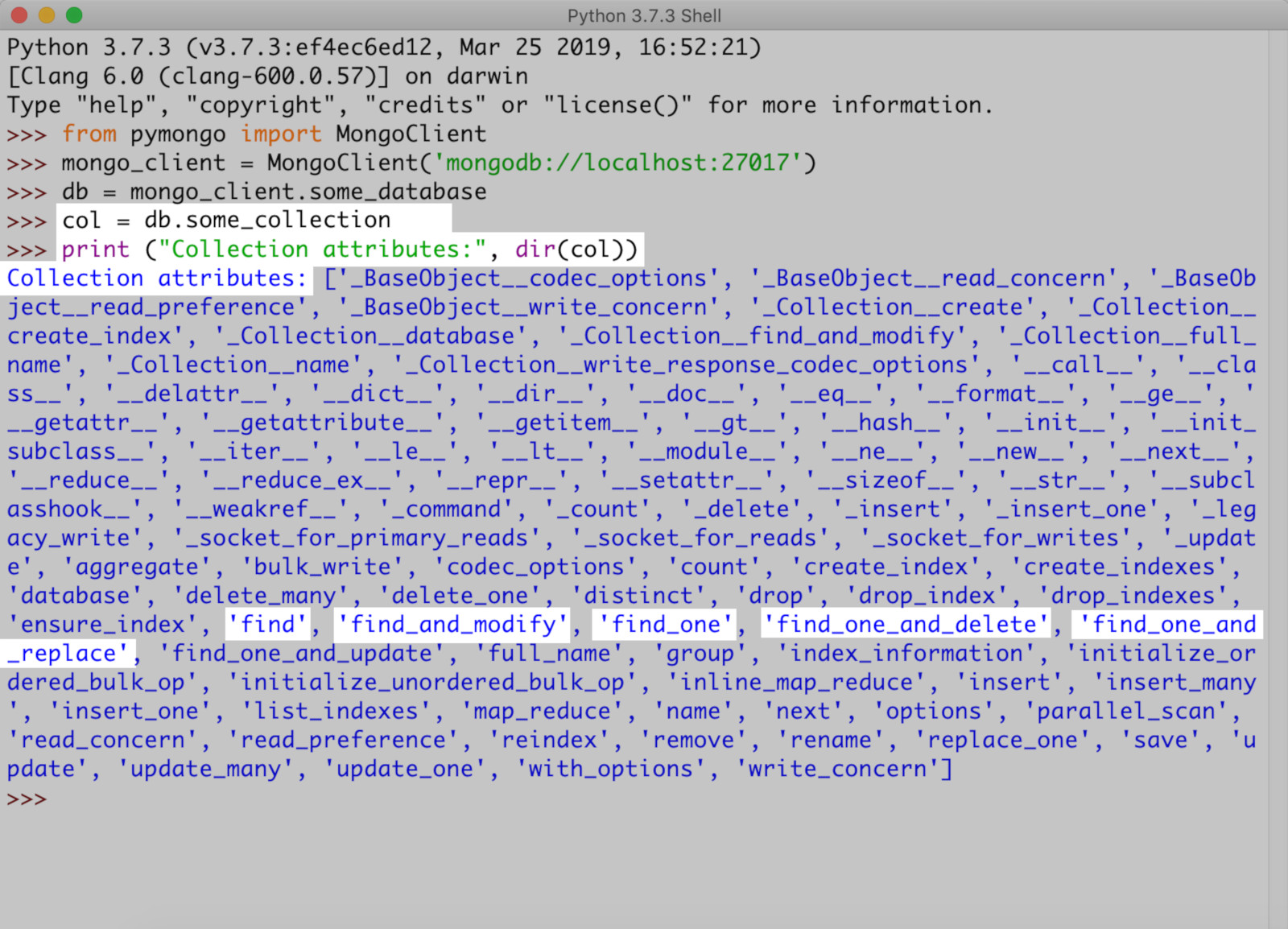 Here’s an example that uses list() to return the documents: 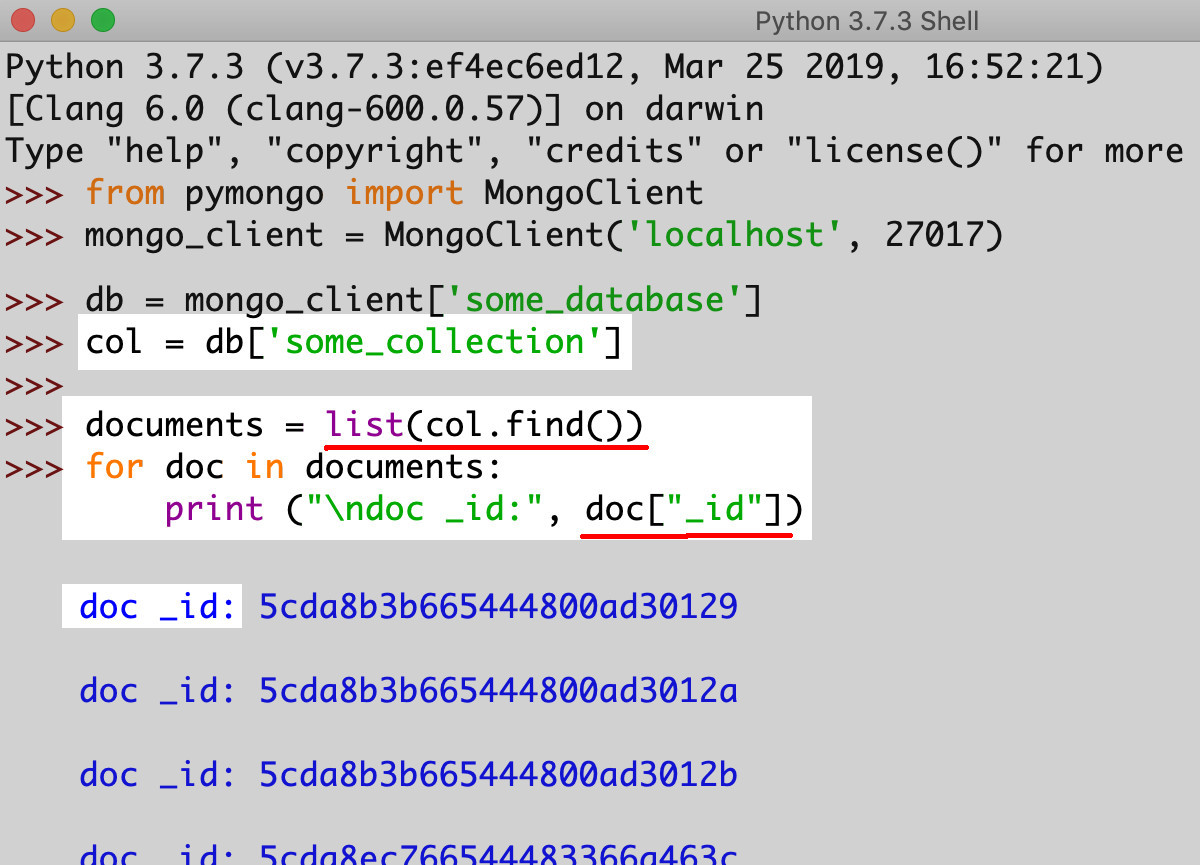 Find a MongoDB document in Python using the find_one() method

The MongoDB find_one() method in Python can be used to iterate the documents in a MongoDB collection, returning the first document that it encounters.

Unlike the find() method that we discussed earlier, find_one() does not return a pymongo.cursor.Cursor object. Instead, it will return a single document as a Python dictionary that you can access. If the collection doesn’t contain any documents, it will return a Python NoneType object.

Here’s an example of the find_one() API call to a MongoDB collection: 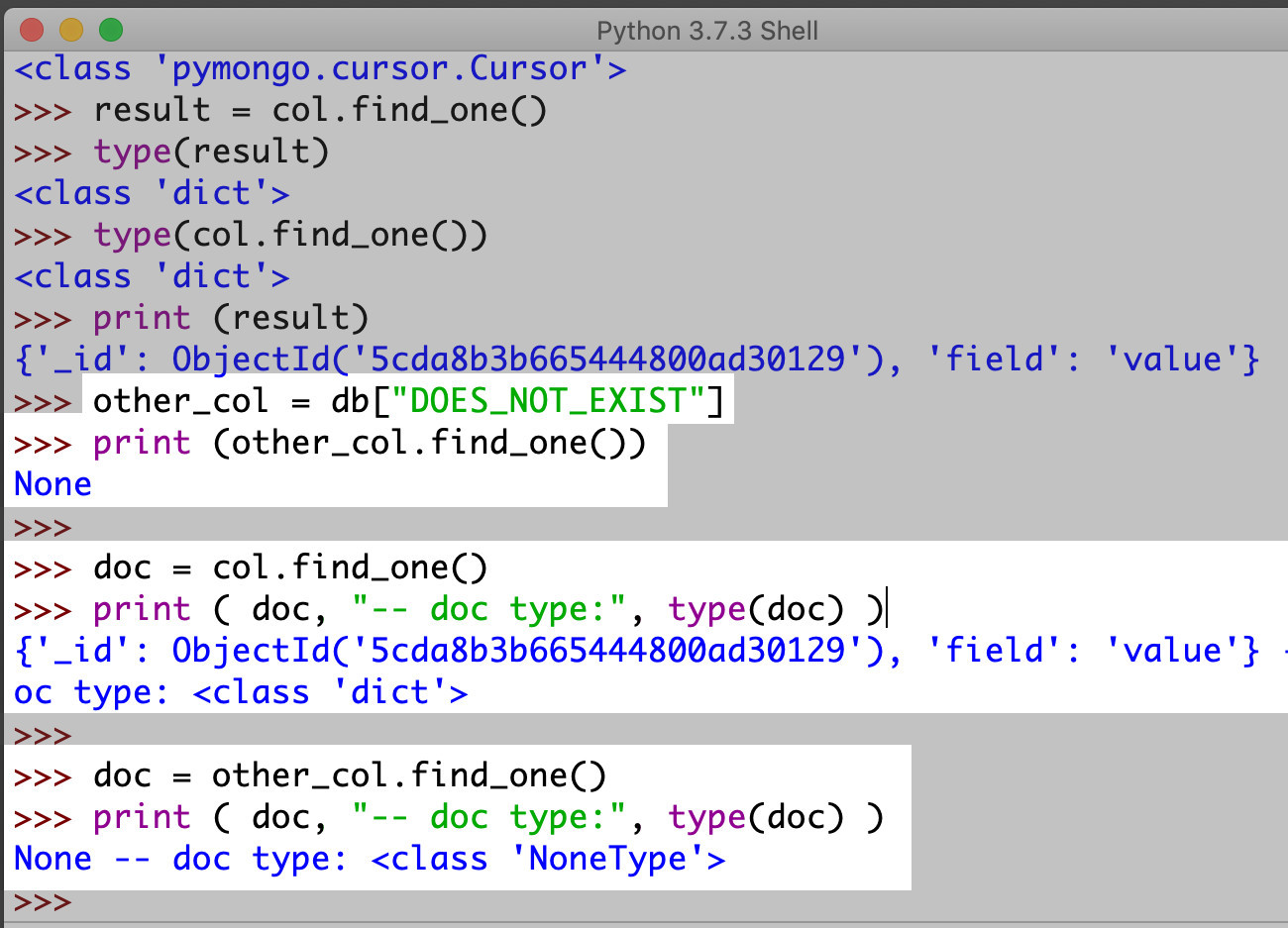 If the collection being queried is empty, or if it hasn’t been created on the MongoDB server yet, be sure your code is equipped to catch NoneType Python objects returned by the API calls.

Make a find_one() API request to a MongoDB collection:

One simple way to catch NoneTypes is to use an if statement. Evaluate the object returned by find_one(), and check if the collection returned None:

Check the length of the pymongo.cursor.Cursor object returned by the MongoDB API call

You can also use the list() function in your script to see how many documents were returned when you query for MongoDB documents with Python. A Python list of documents can be created from the pymongo.cursor.Cursor object if the method returns a Cursor object. In this example, we use the find() API call:

You can then iterate the MongoDB documents as in previous examples but also check the list’s length:

The Cursor object returned by the Find API call has a built-in method called next() that traverses through all of the object’s documents:

The next() method should return a Python dictionary of one of the MongoDB documents with its "_id" as the first key:

If your code raises a StopIteration exception, it means that you reached the end of the Cursor object’s dictionary results.

To handle this, you need to use a try-except block to catch the error, or call the object’s rewind() method to “reset” it.

Use the rewind() method to reset the pymongo.cursor.Cursor object

Let’s try using the rewind() method first. This method literally “rewinds” the cursor, returning it to an unevaluated state:

In some cases, the Cursor object may not have any documents on it. You can use the Cursor.count() method, but this feature has been deprecated since version 3.1 of MongoDB. 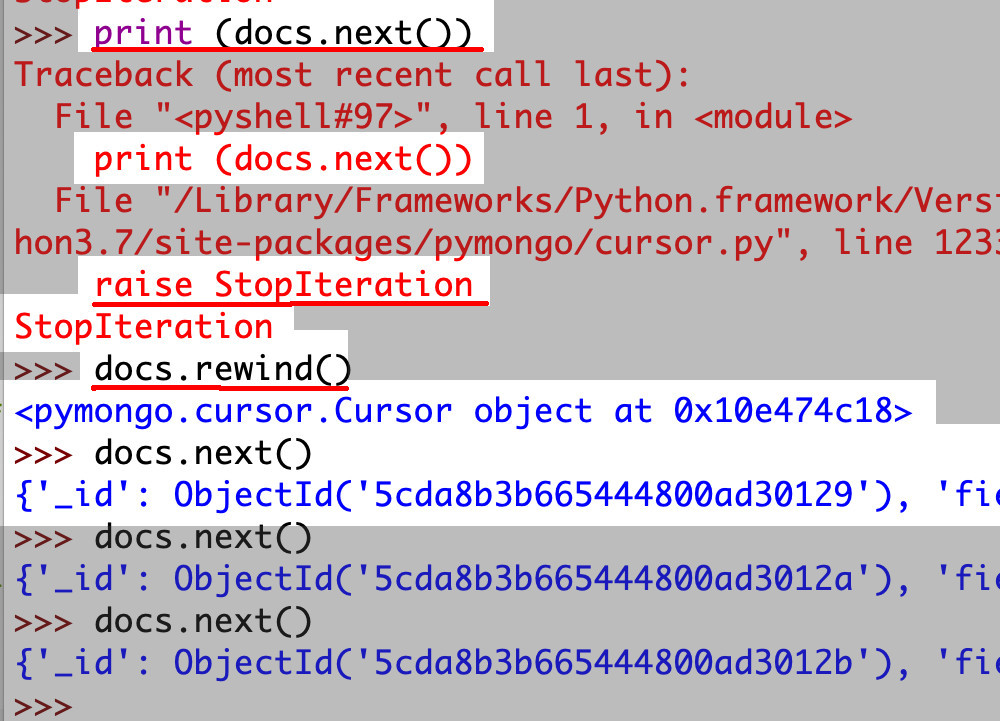 When you make an API request to MongoDB and access a document, you should get a Python document in the following format:

Here’s a simple example that shows how to iterate over a document dictionary’s key-value pairs:

Throughout this tutorial, we reviewed the example code one section at a time. Here’s the complete Python script for your use: