This is part three in a step-by-step tutorial series explaining how to create a Go Lang and MongoDB web app with MVC pattern. Part one explained how to set up the project development environment and create a sample database in MongoDB and part two covered how to configuring the database connection and create the files for the application. Part three will now explain how to add a few new configurations and additional files to the application as well as set up a quick test to confirm the initial configurations are working properly.

Part two of this series covered how to configured the controller and the model of the Go Lang and MongoDB web app with MVC pattern. This section will explain how to handle the user request using the Golang handler HandleFUnc() method.

Following is a breakdown of the above code:

This section will cover creating the front end, or the view, of the application.

First, a new file must be created within the templates directory. Name the file ‘index.gohtml’ and then append the file with the following code:

This section will explain how to run the application to confirm the initial configuration is working properly.

A conformation should appear in the command line saying: You are connected to your mongo database.

Now navigate to the application using the chrome browser with the following URL: http://localhost:8080/products 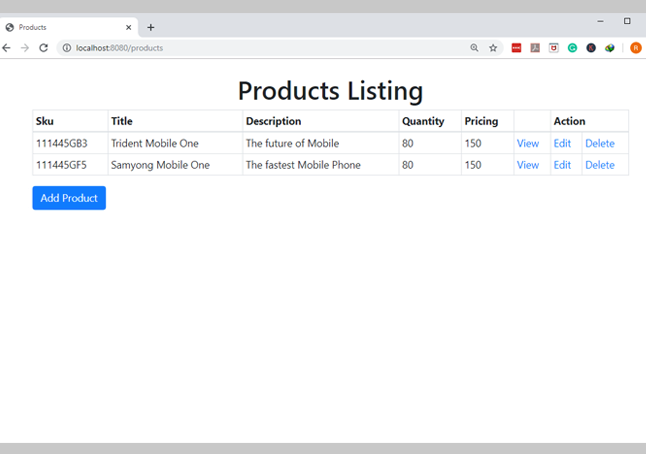 Following is the code of the files used in this application: