This tutorial will explain how to check for instances of and how to access MongoDB databases and collections on a server using the PyMongo driver for Python. The PyMongo Python driver for MongoDB must be installed along with Python Version 3.

No spaces are allowed in a MongoDB database name

Unlike collections, database names are not allowed to have spaces; only hyphens (-), dashes (â€”), and underscores (_) are permitted in a database name, as show here: 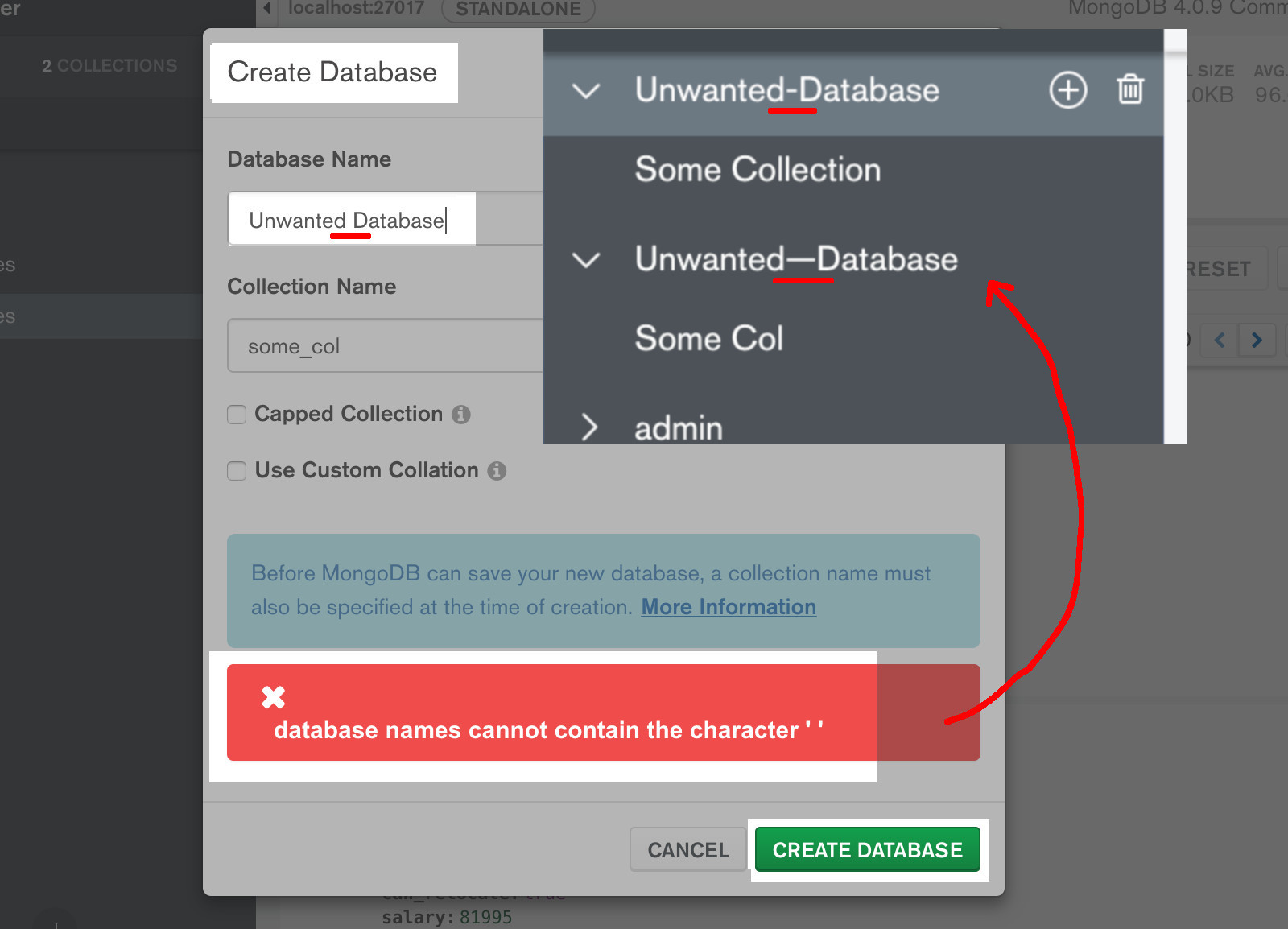 For example, trying to create a database object like client["Hello World"] in PyMongo will return a pymongo.errors.InvalidName exception.

First, import the PyMongo library into the Python script and then create a new client instance of the driver, as follows:

Use the client to access the databases and a collection on the server. Import PyMongo’s errors module to catch any PyMongo errors in a “try-catch” exception indentation block.

Call the client’s list_database_names() method and have the PyMongo client return a list of all the MongoDB database names, in string format, that exist on the server, as shown here:

>NOTE: The database_names() method has been deprecated since version 3.x of MongoDB.

This should print out all of the collection names to provide an idea of precisely what’s on the database. The Mongo Shell equivalent of the list_database_names() method call is show dbs.

How to iterate the MongoDB database names

The above print statements should print out something like the following:

Returning information from the Database object

Calling the Database object itself, or executing a print command as shown below, will return some information about the MongoDB server, such as the host and port MongoDB is running on:

Attempting to access an attribute of the database object will only return a new collection instance using the attribute name.

Selecting a MongoDB Database to Look for Collections

The MongoClient class’s client instance can be used to access a MongoDB database directly in Python by creating a database object. The database and collection object can be used to verify if there are documents and data available.

The database object allows the user to access a collection object directly as well as to call the collection attributes count_documents() method. For example, pass an empty dictionary object ({}) to the method call as follows:

The docs object created should be an integer-type object representing the total number of documents on the MongoDB collection.

If the collection "Some Collection" does not exist on the MongoDB server, then it will be created “lazily” once documents are added to it. Bear in mind, PyMongo will neither raise an exception nor give a warning, so if an instance of a collection that doesn’t even exist is created there will be no indication as to why there aren’t any documents found on the collection.

How to call the database object’s validate_collection() method

One way to get around not having any documents returned is to actually force PyMongo to raise an error if a database and collection don’t exist. Do this by using the db.validate_collection() method by having it return a Python dictionary containing any collection and document information.

PyMongo raises an OperationFailure exception if a collection does not exist

Try to access another database and collection to see what documents are there, as follows:

If the collection doesn’t exist, then PyMongo will raise a OperationFailure exception saying ns not found. A good way to verify a database’s collection, and its documents, is by using a try-except indentation block in Python, as follows:

Set the col_dict variable’s value to None if there’s a PyMongo error. Now, if the collection exists, the object can be evaluated.

The following importation line must be included at the beginning of the script to avoid a NameError: as name 'errors' is not a defined exception:

Use PyMongo’s validate_collection() method to check if a MongoDB collection exists and has documents, as shown here: 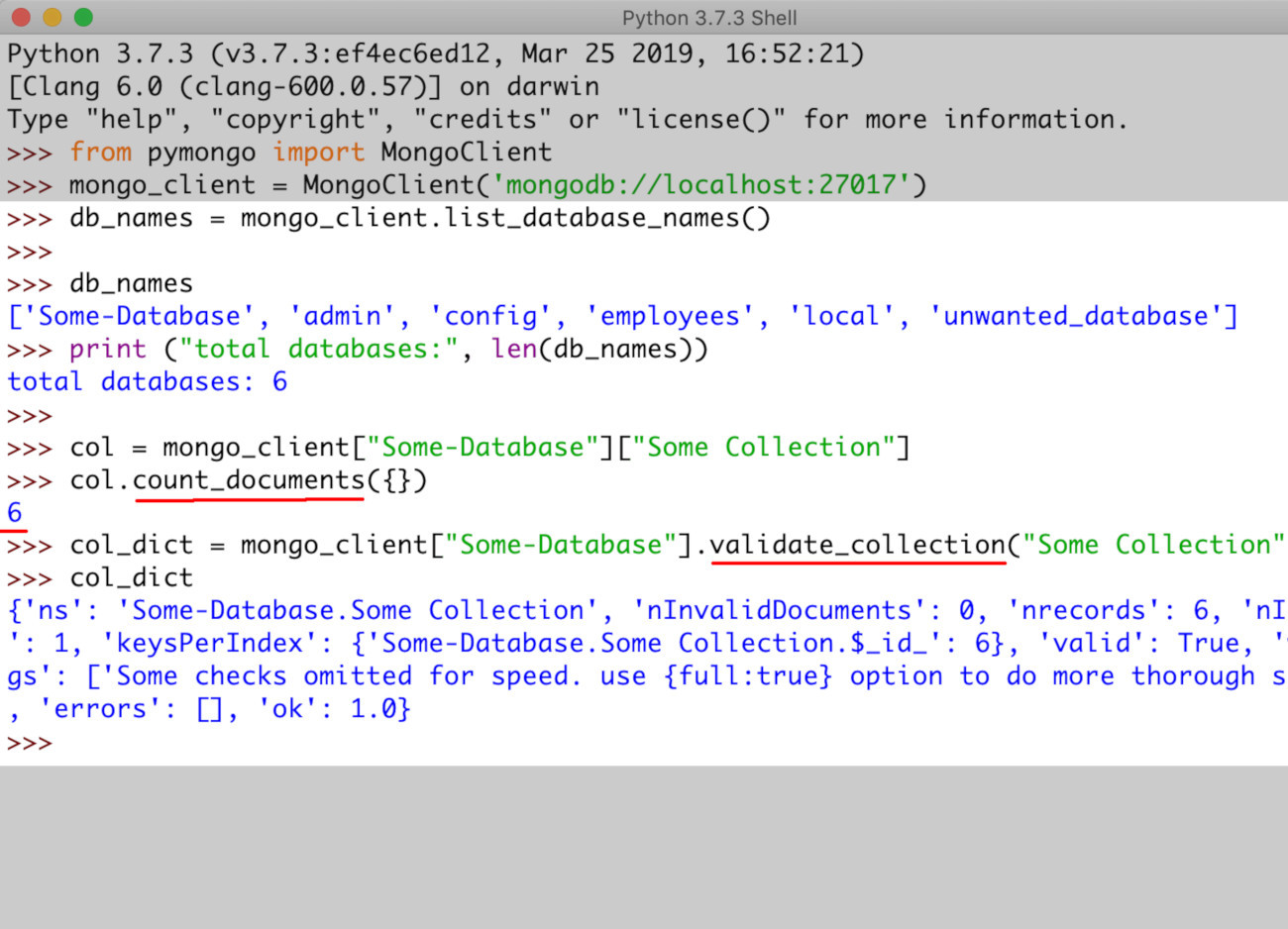 Use the drop_database() method to delete the MongoDB database

The API call does not return a Cursor or Results object, only a NoneType object.

Execute another call to the list_database_names() method to verify the database was dropped, as follows:

Now the total number of databases should be one less than before.

This tutorial demonstated how to check for, create and access a database and collection on a server using the PyMongo driver for Python. The MongoDB server must be operating on the same cluster as the node or machine running the Python script. Bear in mind, PyMongo will not raise an exception even if they haven’t been created on the server and there will be no indication as to why documents are not found on the collection. To avoid this, PyMongo can be forced to raise an error if a database and collection don’t exist by using the db.validate_collection() method to return a Python dictionary containing any collection and document information.