Let’s go over a few prerequisites and dependencies that need to be in place for this tutorial:

The simplest way to install Bottle is to use the PIP3 package manager for Python 3:

You can use the UNIX command wget to download the library directly into your project directory:

If you’re on a Debian distribution of Linux, such as Ubuntu or Linux Mint, you can use the apt-get repository:

Now that we’ve installed and set up everything we need, we can move forward and open our Python script. We’ll import the run and get libraries from the Bottle framework:

We’ll also import the MongoClient class, as well as the errors library for checking the connection to MongoDB:

Create a client instance of the PyMongo library

After the import statements are complete, the first thing to do is to create a client instance of PyMongo that can connect to a MongoDB server.

We’ll declare the domain and port variables outside of a function call so that they have a global scope and can be evaluated inside a function:

Next, we’ll call the PyMongo library’s MongoClient() method inside of a try-except indentation. Be sure to concatenate the domain and port variables as a string before passing them to the method call:

Call the client’s server_info() method to raise an exception

The client instance’s server_info() method will raise a ServerSelectionTimeoutError exception if the client fails to connect to a MongoDB server at the specified domain and port:

The code shown above assigns client a value of None if the client failed to connect to the server. Later in the script, we’ll check this value to see if the connection was successful.

PyMongo failed to connect to MongoDB while running the Bottle server

The reason we need to catch the errors library’s ServerSelectionTimeoutError exception is to verify that the PyMongo client actually connected to the MongoDB server– the client instance won’t indicate this otherwise.

Let’s imagine you accidentally set the port in your Python script to 2701 instead of the default 27017 port number. This try-except indentation allows you to receive a response, alerting you that the port may have been set incorrectly, or the server is otherwise not running. 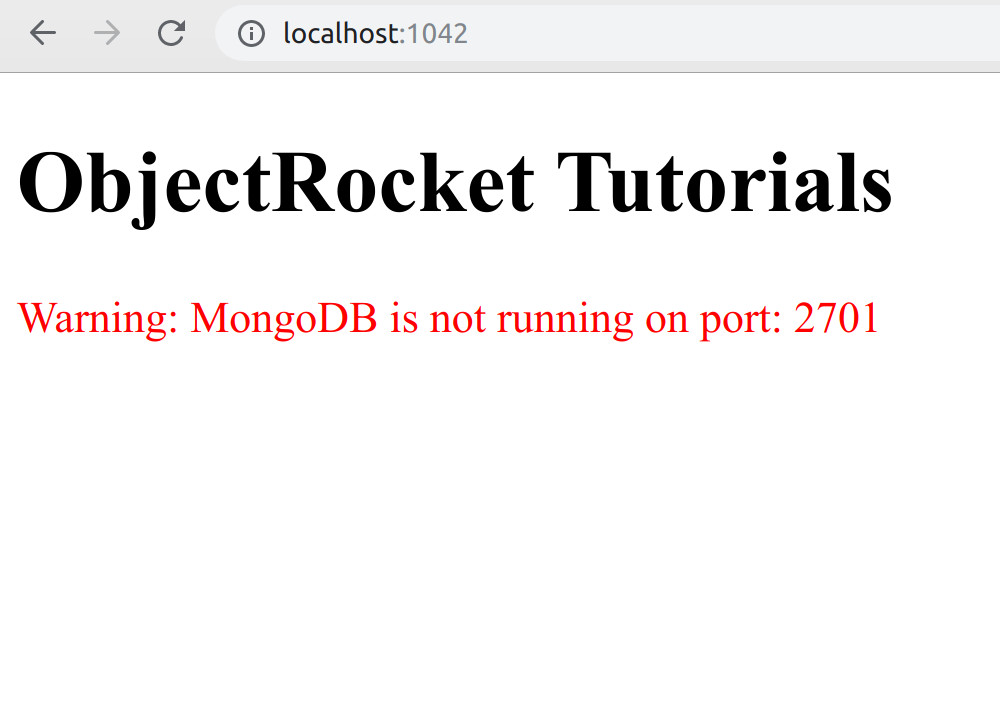 In this section, we’ll declare a function that will concatenate the API data returned by the PyMongo client as an HTML string:

If the client instance created earlier does not have a value of None, we know that the connection was successful, so we can make an API call that will return all of the database names for the server:

NOTE: The database_names() method used in earlier versions of PyMongo has been deprecated in favor of list_database_names(). Use the code int(pymongo.version[0]) >= 3 to see if your version of PyMongo is 3.x or newer. 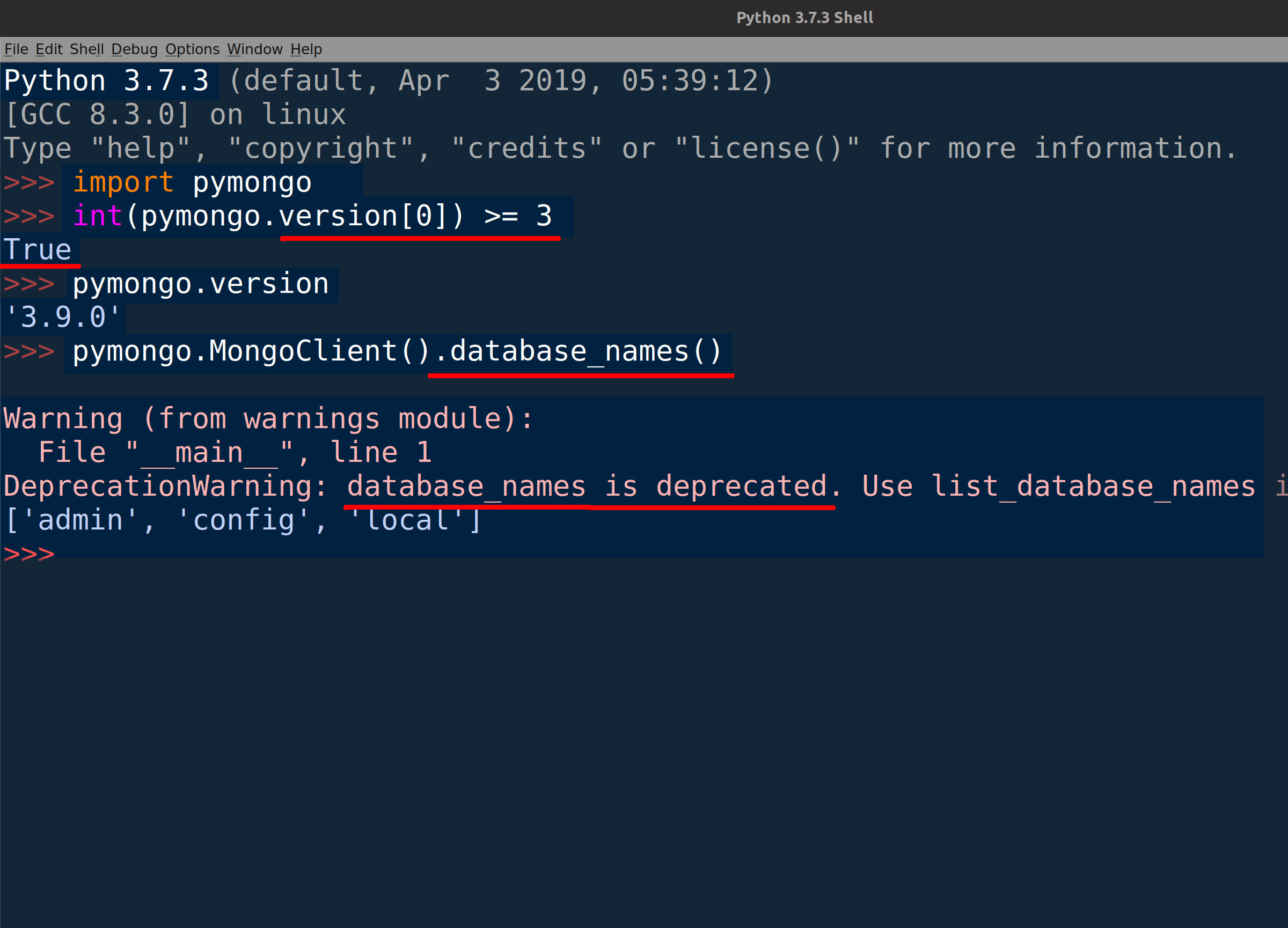 The method call should return a list of strings containing all of the MongoDB server’s database names.

Next, we’ll iterate over the list returned by the list_database_names() method call and append each database name to the html string declared earlier:

The above code puts the names into an HTML tag and uses the style tag for CSS to change the color if the client instance has a value of None. Once the iteration is complete, the function will return the string and pass it to the Bottle framework’s home() function.

In the next bit of code, we’ll call the Bottle framework’s home() function and have it return the concatenated HTML string returned from our MongoDB API call:

The @ Python decorator acts as a pointer, letting Bottle know that the script will run and return the HTML when the user navigates to the site’s home page (/) on the front-end.

Pass the port for the Bottle application to the run() method

We’ll call the Bottle framework’s run() method next. As you follow along with this example, make sure to specify an integer for the port parameter and a host string for your website’s domain. Simply use localhost if you’re testing and developing locally:

Use the python3 command to run the script for the Bottle framework:

Now, open a browser tab and navigate to the port that was passed to the run() method at the end of the script on the server name that was also passed to the method. You should now see some HTML listing your MongoDB collection names: Getting a Socket Bind OSError when running the Bottle Python script

If the port address for the socket is in use, you may need to manually end the process by getting its process ID (PID) and using the kill -9 command in a terminal window to end it:

Find all of the processes running on the Bottle port

Use the lsof command to look for all of the PIDs running on the port specified in your Bottle application:

It should list all of the processes by PID under the second column in the text output in the terminal window: The following demonstrates how to end a process using kill -9; be sure to replace the example PIDs with the PIDs for your own Python processes: 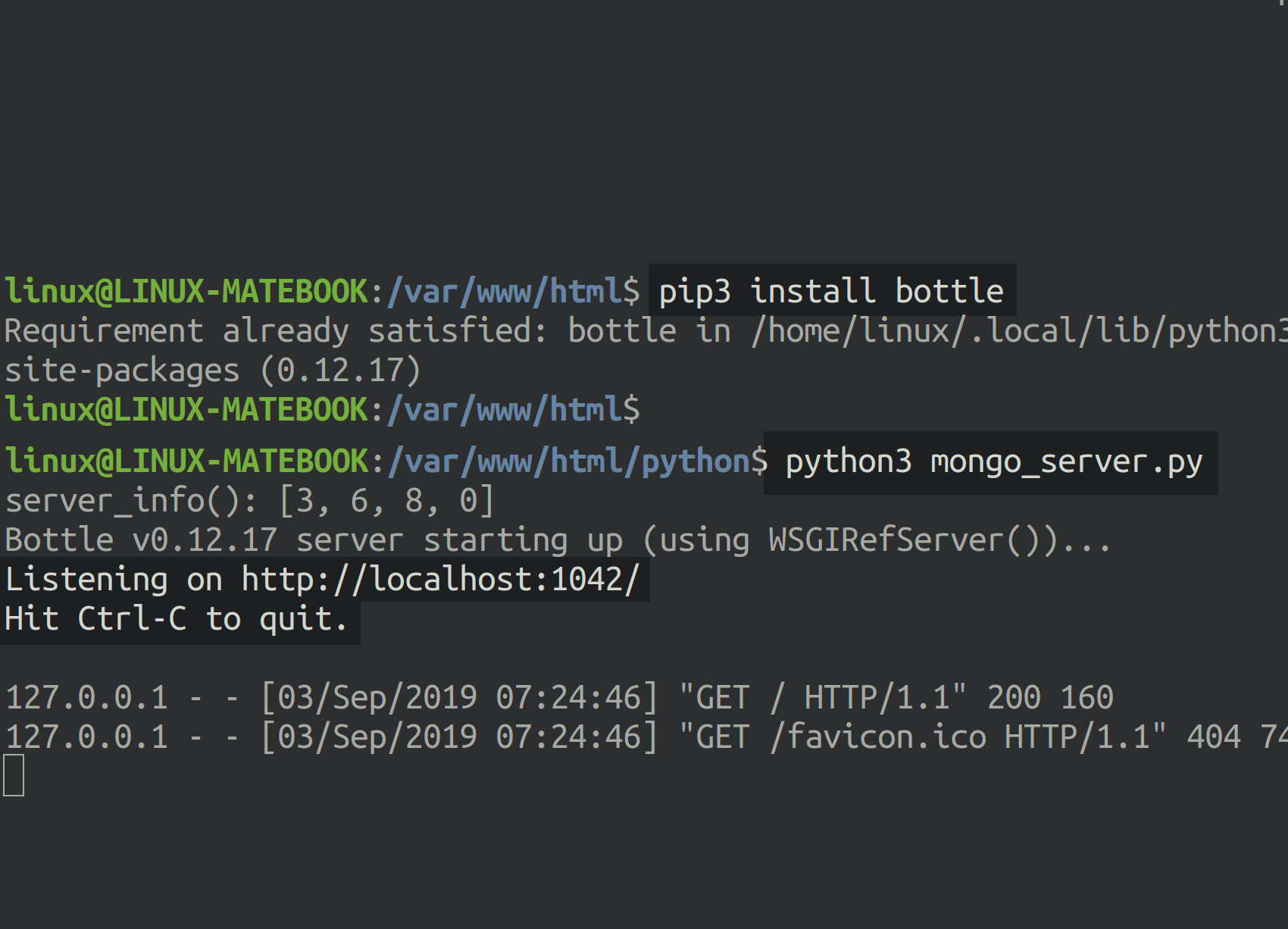 It’s clear that the trio of MongoDB, PyMongo and Bottle offer a powerful toolkit for building stable, scalable web applications. In this article, we showed how to build a MongoDB and Pymongo webapp with the help of the Bottle framework. With this example as a guide, you’ll be prepared to build your own webapps using the same tools.

Shown below is the complete script we looked at in our tutorial: