Written by Data Pilot
September 03, 2019
Subscribe
Like
Have a Database Problem? Speak with an Expert for Free
Get Started >>

This article demonstrates how to build a GUI application for MongoDB, that can be deployed to multiple platforms, using the Kivy framework and Python programming language in less than 200 lines of code. The completed application in this article will allow the user to access the databases on a MongoDB localhost server, and retrieve their respective collection names, by making PyMongo API calls inside of the Kivy App class.

This is Part 2 of a two-part series. The last part showed how to install the libraries, connect to the MongoDB server, and finally setup the Kivy application class. This article will show how to create button and label widgets for the app, as well how to make API calls to MongoDB, using PyMongo, and then use the returned data to change the Kivy label widgets.

Prerequisites for creating a MongoDB GUI application with Python and Kivy

Create a new directory for the Kivy application files, and, in the app’s Python script, make sure to include the following code to import the necessary package libraries for the MongoDB GUI application:

The examples used in the next few sections were given in the first installment of the series, so the following bit of code is a refresher in case you missed it.

Check that the MongoDB server is running using PyMongo

The following is some of the code from the first article showing how one can check the PyMongo connection to MongoDB while instantiating a client instance of the library.

In the first part we demonstrated how to pass some values to the MongoClient() method’s host parameter.

Declare the following objects outside of any class or function declaration to give the variables a global scope:

Declaring an instance of the MongoClient() method library for PyMongo

This code uses a try-except indentation block to declare an instance of the MongoClient() library. If there’s an error, or a problem connecting to MongoDB using the specified domain and port, then it will return a NoneType object instead of the MongoClient object:

Unlike the first article, however, the code above creates a global list object containing all of the MongoDB server’s databases, but will return an empty list if the connection failed, or if the API call, for whatever reason, returns a ServerSelectionTimeoutError exception.

The list of database names will be used to populate a list of Kivy Button() widgets later on. 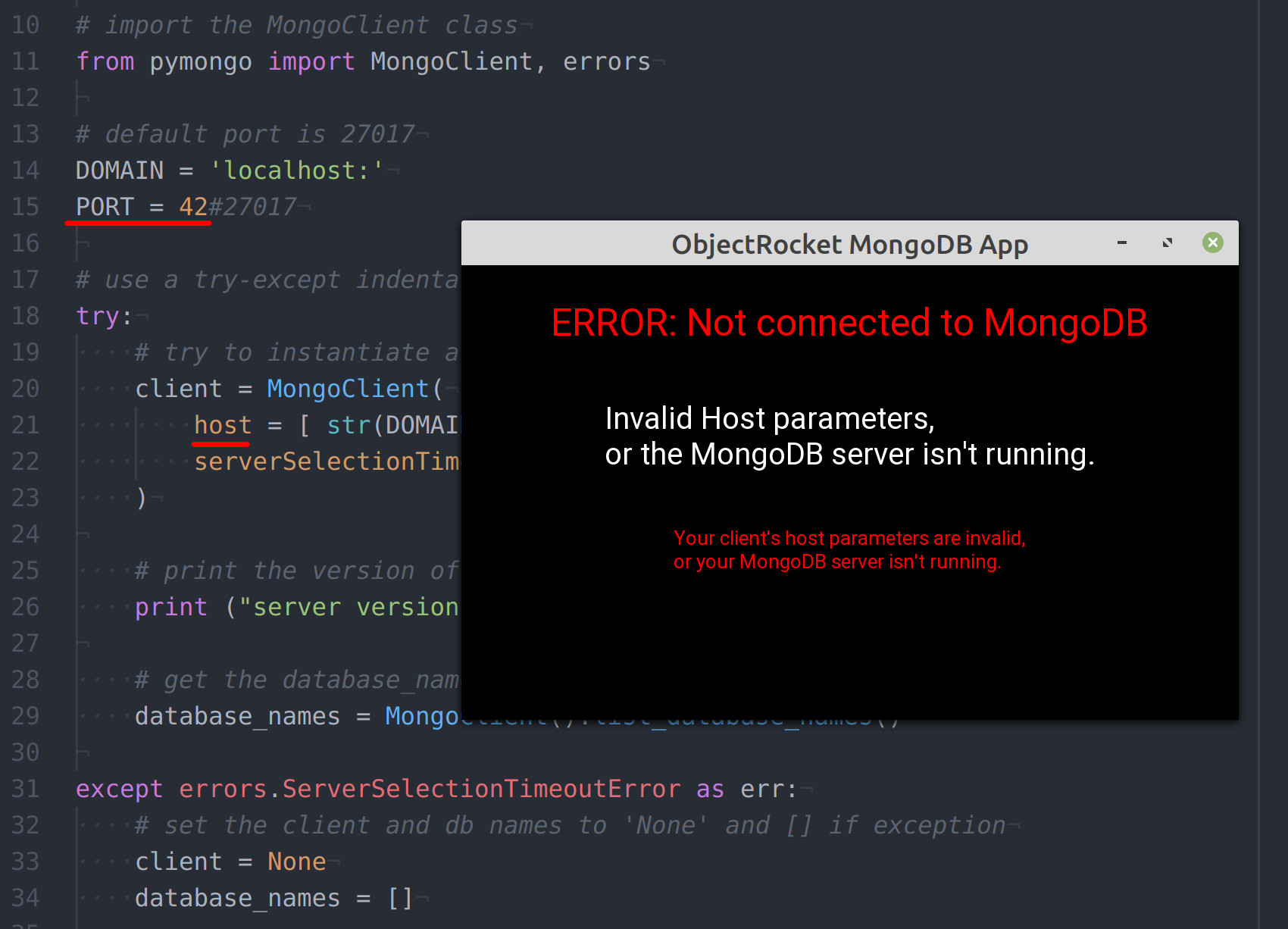 The example code in this article uses a 3 seconds (serverSelectionTimeoutMS = 3000) timeout to attempt to connect before raising an exception and displaying the connection error in the Kivy app.

Declare a new class with Python’s class keyword for the Kivy application by passing the entire App library to the class declaration as an argument so that it can inherit all of Kivy’s classes and methods:

All of the Kivy widget declarations and events will be inside of this build() function for the application.

Classes in Python have a “self” keyword that serves as an instance, or a stand-in, for the class object itself. The following example code uses self to access the Kivy App class attributes.

This application uses the "vertical" layout which “stacks” the widgets vertically, on top of one another, as each one is added with the add_widget() method call, and the following code assigns a string value to the class’s title attribute to give the application window a new title:

NOTE: The selected_db attribute doesn’t actually exist as a part of the App class, but we’ll declare it in order to keep track of which database was selected by the user.

Create a Kivy label widget for the MongoDB client status

Declare a new Label() instance for the domain name information, and also a label that displays the selected MongoDB database:

NOTE: Make sure to pass each Label() instance to the layout object’s add_widget() method in the order that you’d like each widget to appear in the application window.

Check if the PyMongo MongoClient() method was able to return a valid client instance (instead of just None), and iterate over the list of the server’s database names using Python’s enumerate() function:

Append the Kivy Button() widget with each database iteration

Make sure to append a new Kivy Button() widget in each iteration, and then access the last widget in the list using the [-1] bracket pointer:

Once you’ve accessed the widget you can then change its padding, text, and font_size properties.

Use Python’s lambda function to change the Kivy widgets’ text

Python has a built-in function called lambda that let’s you declare a function while assigning some value to an object. Use lamda to pass some variables to each widget’s callback function (to be declared later on).

Make sure to pass the App class’s self keyword, the MongoDB database button’s text, and the database label widget to the function call:

Add each widget to the layout at the end of each iteration in the loop.

Evaluate the selected_db attribute, that we declared earlier, to see if the user has pressed a MongoDB database button

The above code will change the domain label’s text attribute to reflect the host parameters passed earlier.

Declare a Kivy label widget for the MongoDB collections

The last widget to display MongoDB information is for the collection data returned by PyMongo after a user presses a database button:

NOTE: Kivy uses 4 float values in a tuple array to determine colors for widgets with 1.0 being the highest value (equivalent to 255 in the RGBA color scale), and 0.0 representing black, or full transparency for the alpha channel.

Change the Kivy labels after evaluating the PyMongo client instance

Change the Kivy labels based on the PyMongo client’s values. The Kivy app will display red text if PyMongo failed to connect to the MongoDB server, but it will be blue if the connection was successful:

Add the widget labels to the Kivy layout

Add the widget labels to the Kivy layout and return the layout after their data has been altered to reflect the data returned by the PyMongo API calls to the MongoDB server:

The Kivy add_widget() method call adds the labels to the layout in the order that each one is called.

Declare the Kivy callback function for the MongoDB database buttons

Use Python’s def keyword to declare a callback function, inside of the Kivy App class indentation, for the MongoDB databaseButton() widgets that will change the text attribute for Kivy widgets:

Evaluate the client instance once more in the callback function and make an API to MongoDB to get the selected database’s names in a list object:

Declare an empty string that will be used to display all of the collection names in a Kivy Label() widget.

Use enumerate() to loop over the MongoDB collection names and append each name to the string for the label widget:

NOTE: The above code uses two hyphens ( --) to delimit each collection in order to save some vertical real estate space within the app.

Perhaps Kivy’s best feature, besides its ease of use, is its ability to easily deploy apps on multiple platforms. For the sake of brevity this example application has only limited functionality (especially when compared to Mongo’s Compass UI application), but hopefully, after reading this article, you can see the potential in using Kivy to deploy your own customized GUI application to multiple platforms.