How to Install and Setup the Python Psycopg2 Driver for CockroachDB

Written by Data Pilot
June 04, 2019
Subscribe
Like
Have a Database Problem? Speak with an Expert for Free
Get Started >>

This tutorial will explain how to setup psycopg CockroachDB and install and setup the Python Psycopg2 Driver for CockroachDB. The psycopg2 library is designed specifically as a Python driver for CockroachDB and Psycopg is constructed to be dependent on the PostgresSQL relational database management system. While the CockroachDB and the Psycopg driver will work with Python 2, it is strongly recommended to use a Python 3.x version and its package manager command pip3 instead of Python 2.7 as Python 2.x is deprecated and scheduled to lose support by end of 2019.

Prerequisites to running Psycopg2 with CockroachDB

How to upgrade the pip3 package manager

Using the PIP package manager is the simplest way to install Python packages. If pip3 is not already installed, do so before proceeding with this tutorial.

How to install CockroachDB Python and start the cluster

For development and debugging purposes only, execute the following command to start an insecure, local cluster:

Navigate to http://localhost:8080 in a browser tab to interact with the CockroachDB cluster running via localhost. 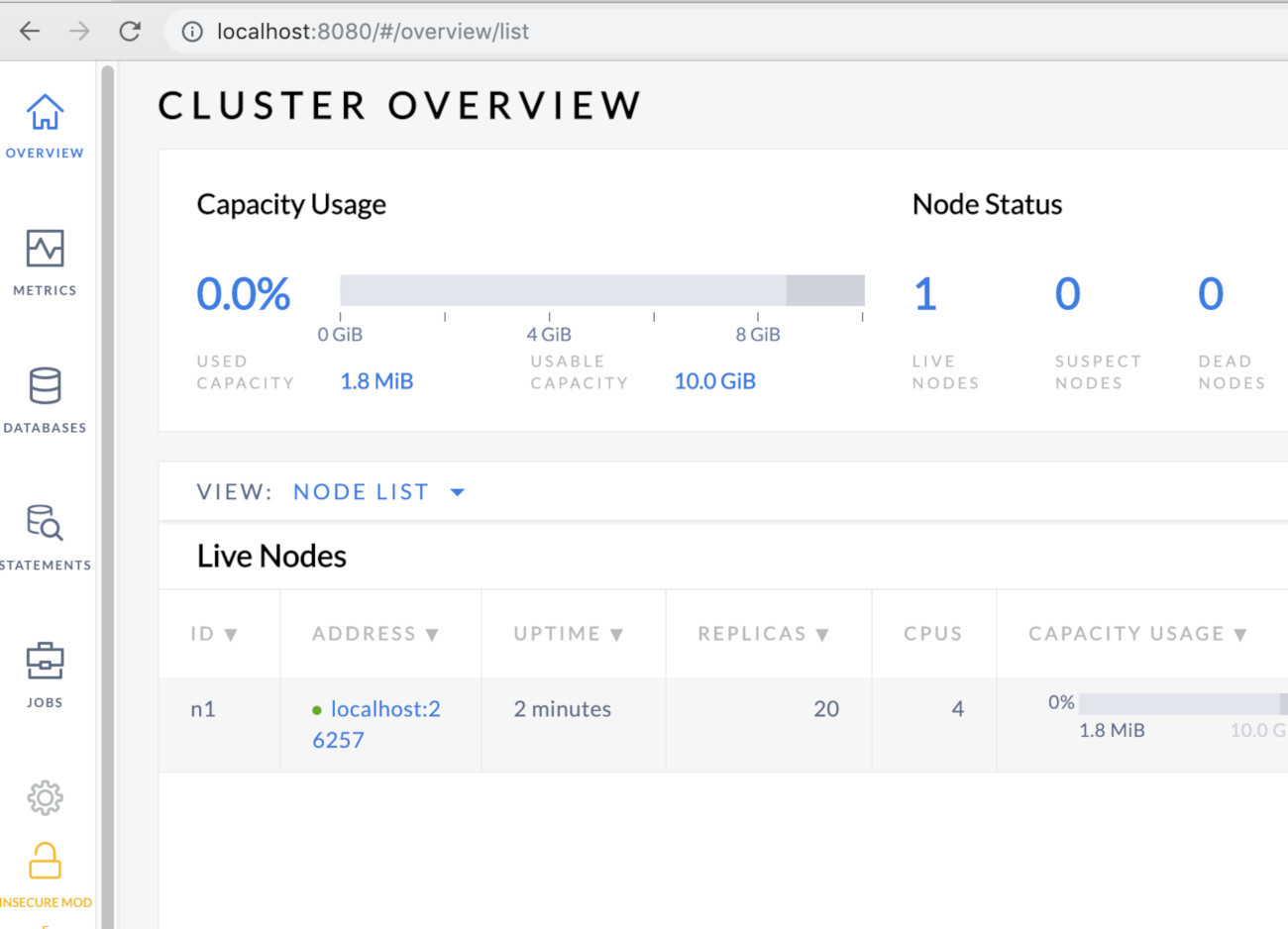 How to create a CockroachDB database and grant permissions to users

Now create a user, a database and give database permissions to the user using these SQL commands:

Type q and press Return to exit the shell interface.

Psycopg is a database adapter, written in Python, for the PostgreSQL object-relational database. Postgres must be properly installed and configured in the system’s OS PATH for psycopg2 to function correctly.

How to install PostgresSQL for macOS using Homebrew

Use the following Homebrew brew command to install PostgresSQL on a macOS computer:

Use the following command to start the service once the Homebrew installation has completed: PostgresSQL:

How to install PostgresSQL on the Debian-based distro of Linux

If the server is a Debian-based distribution of Linux using the APT repository, update the repository packages before installing PostgresSQL, making sure to have sudo access, as follows:

Next, install the PostgresSQL library from the apt-get repository, as follows:

Next, start the service with the following command:

Confirm that PostgresSQL is properly installed and configured

A new database should now be created using the system’s username.

NOTE Type q to exit the command interface for psql.

If it returns a version number, such as psql (11.3), as it loads the interactive terminal, or if it returns a Psql error, then the PostgresSQL is installed correctly.

Alternatively, the Postgres configuration settings may be accessed directly with the following command:

Besides the version number, the above command should also return installation information and the directory where it is installed.

Execute the below command in a terminal window for psql to return its version number:

Press the CTRL+C keys to stop PostgreSQL and exit, as show here: 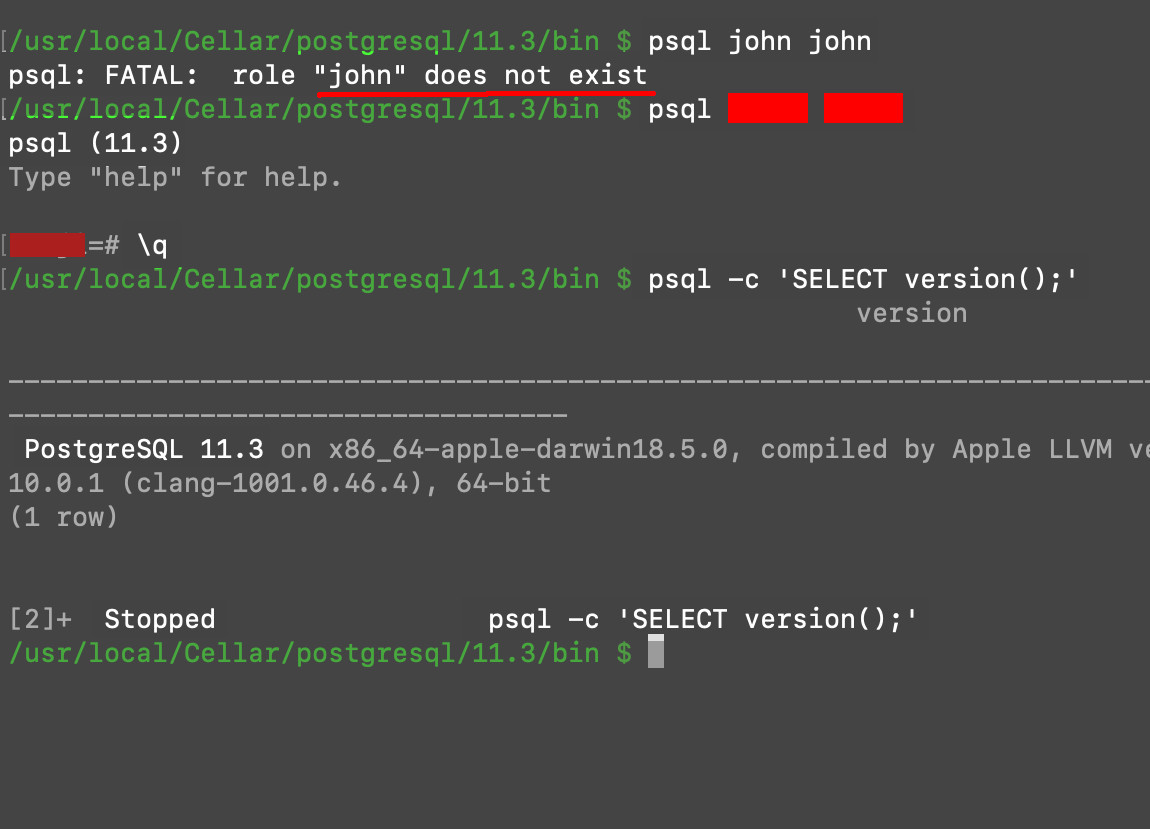 How to Troubleshoot the PostgreSQL Server

Look for the processes of PostgresSQL that are running if the program is not working correctly. Use the grep command to locate any processes with post in the name, as show here:

Use the below PID command to kill a process:

How to fix a ‘psql: could not connect to server

There is usually an issue with the server when this occurs, typically meaning the Postgres process didn’t shut down properly. First, reboot the machine or server running Postgres. If that doesn’t correct the error then try stopping and starting the PostgreSQL process, as show below.

Stop and start the postgres service in a UNIX terminal with the following command:

Stop and start the postgres service on a macOS Homebrew installation with the following command:

How to delete the postmaster.pid file and restart the server

WARNING: This method should only be used as a last resort, as it has the potentially to delete or damage all data stored with Postgres. To minimize the risk of losing data, make sure that all instances of postgres are shut down before attempting this. Use the following ps command to confirm no processes are running:

The Postgres server is supposed to delete the postmaster.pid file upon startup if the state of the server is invalid. However, it won’t do so if the process didn’t shutdown or start properly.

Depending on the OS and installed version of PostgresSQL, the file should be located in one of the following directories, or one of the sub-directories:

Go into the directory and list all of the files, including the hidden ones, with the following commands:

As a precaution, once the files have been located, backup the data with the below command before deleting it:

Use the following rm command to delete or remove the file:

After deleting the file, try restarting the PostgresSQL server or application. It may be necessary to also restart the server or machine.

try recreating the user database with the following command:

How to install the Psycopg library on the server running CockroachDB

If PostgresSQL and the PIP3 package manager for Python are properly installed, just run the following command to install the psycopg library:

Prior to installing the package libraries for Psycopg, update the APT repository and install the setuptools with the following command:

Then use apt-get to install the psycopg2 library for Python 3, as shown here:

How to troubleshooting psycopg2 installation issues

If a build or other error occurs, try building the source packages with the following command:

If the service is still won’t work properly, try to export the working path for PostgreSQL’s pg_config service, using the find command as follows:

Once the path is located, start the super user mode and then export the system path for pg_config using the following command:

NOTE: Make sure to replace /usr/path/to/pg_config with the correct working path. The proper path may depend on the OS and PostgreSQL installation method.

How to build the psycopg2 driver from source using Python 3

How to correct the installation error pg_config executable not found

An error such as pg_config is required to build psycopg2 from source or something similar, may display. If so, try installing psycopg2 again with sudo privileges.

How to import Psycopg2 into a Python script or interpreter

At this point there should be not be anImportError raised when entering a Python interpreter, opening an instance of the IDLE environment for Python 3, such asidle3 in a terminal, or importing the library.

Import the psycopg2 library and create a new connection instance by passing some values to the dbname and user parameters. The default for both values should be the system’s username. Type whoami into a UNIX terminal to find the system username, as show here:

If the Postgres server is running, and the correct dbname and user parameters were passed into the connect method’s string, then Psycopg should return a connection object as a response, as shown here: 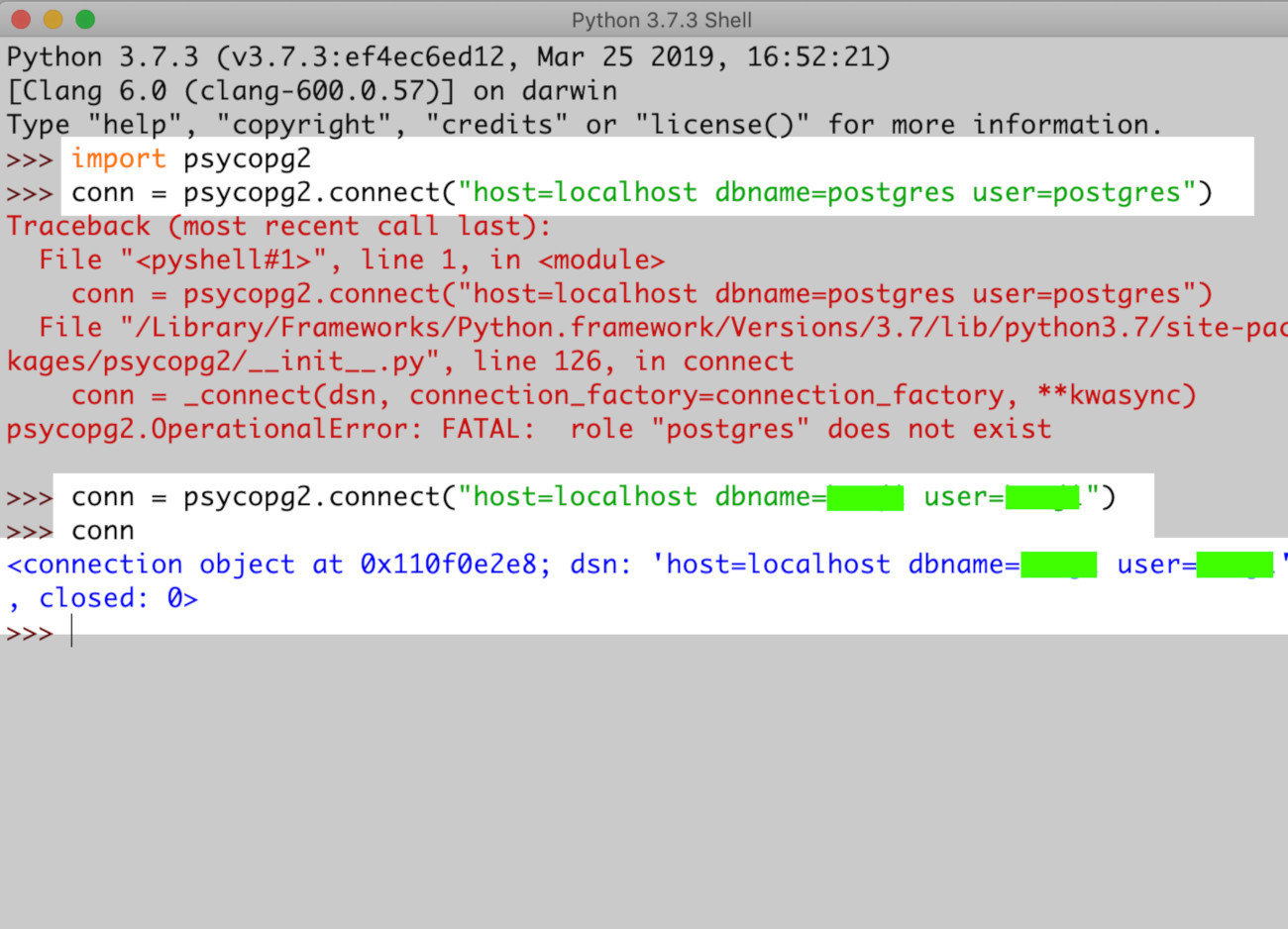 How to Connect the Python Driver with CockroachDB

First, create a new instance of the Python interpreter, or a new script. Then import the library, but this time create a connection instance of the psycopg2 library that connects to the CockroachDB instead.

The default port for CockroachDB is 26257. This should suffice for the port parameters, unless the DB was configured differently. Make certain to enter the correct credentials and database name into the connect() method parameters, as shown here: 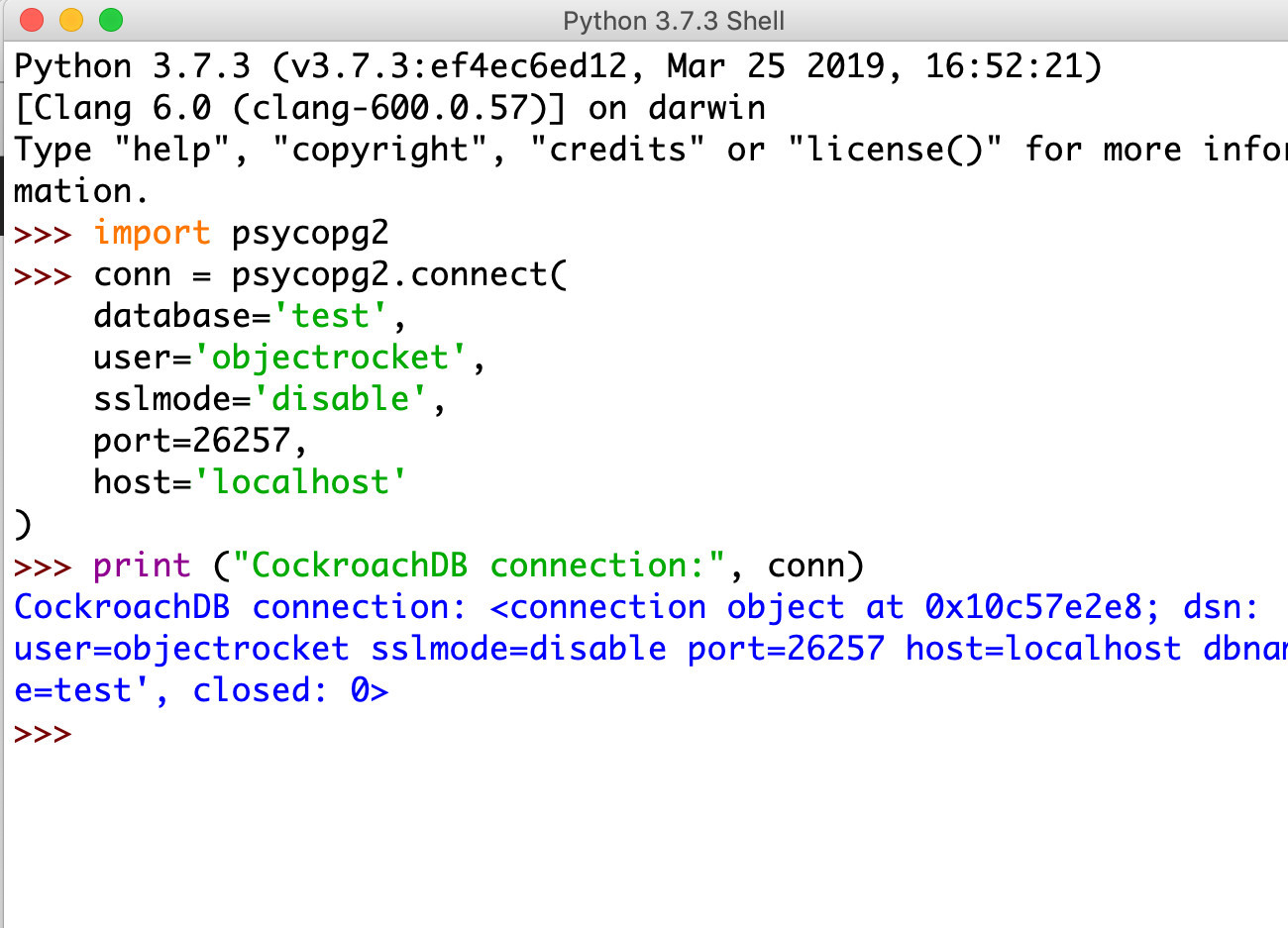 This tutorial demonstrated how to install psycopg Python, specifically PostgresSQL to allow the Psycopg2 Python Driver to function. The tutorial also demonstrated how to install the CockroachDB and start the cluster and how to upgrade the pip3 package manager. Installing psycopg2 and PostgreSQL and using them to connect Python to a CockroachDB database requires Python version 2.7 or higher. However, Python 3.x and its package manager command pip3 should be used instead as Python 2 is scheduled to lose support by end of 2020. After installing the psycopg driver for CockroachDB and the setup of psycopg CockroachDB is completed, confirm that PostgresSQL has been properly installed and configured.