How to Insert a CockroachDB Record using Golang via Web App

Written by Data Pilot
July 15, 2019
Subscribe
Like
Have a Database Problem? Speak with an Expert for Free
Get Started >>

There are only a few prerequisites for this task, but it’s important to confirm that they’re in place before proceeding:

If you’re not sure whether Go is installed on your machine, run this command:

You should get results that look like the following:

Notice that the output includes the currently installed version of Go and the particular OS on which it was installed.

Before we can do anything with CockroachDB, we’ll need to start a CockroachDB local cluster:

Let’s dissect this command to understand the various flags and options:

If you run the command shown above, you’ll see something like this in your terminal:

We can connect to this new CockroachDB instance by opening another terminal window and running the following command:

The output of this command should look something like the following:

Now that we successfully connected to CockroachDB, the next thing we’ll do is create a sample database that can be used in our examples. The following SQL statements can be used to create the “yeshua” user and “restaurants” database:

To access the database after creating it, you can use the statement SELECT DATABASE = restaurants;

For this tutorial, the user “yeshua” will be given both read and write permission to the database:

Once the “restaurants” database has been created, a simple table can be created in it. This can be accomplished with the following SQL statement:

Later in this tutorial, we’ll put some record(s) in the “tblrestaurants” table.

When you’re done creating everything, use \q to quit the SQL shell.

How to Use the Go pq driver in CockroachDB

At this point, we’re ready to move forward and connect the Go pq driver to our CockroachDB instance, so let’s start working on our code. Create a new file in your project directory and save it with a “.go” extension. In this example, we’ll name the file “main.go”.

In Golang, package main tells the Go compiler that the package ought to be compiled as an executable program, not as a shared library.

Be sure to download the necessary dependencies using import statements:

Let’s look at each of these packages and what they’re used for:

NOTE: Avoid using the driver packages directly in your script; instead, refer to the types defined in the database/sql package. This will prevent your code from being dependent on the driver you are using.

We use struct to create a collection of named fields and properties that matches the fields in our tblrestaurants table:

So far in our script, we’ve imported the necessary dependencies and created the struct that will hold the values of our database records. Now, we’ll connect to the database using the following script.

Here, we’re creating a package-level variable called “db” that we can use globally within this package:

Then, we create the function init(). This will be called only one time and will allow us to set up the correct database connections:

The code shown above simply opens a connection with sql.Open(), assigns it to db and then checks for errors.

To test if you’re able to connect to the database, just add the following code to “main.go”. Don’t worry about what it does for now– we’ll explain that later in the article:

Save the file, then open a terminal window snd navigate to your project directory. Run the following command:

Insert a Record in CockroachDB

The next section of our code performs an insert operation into our “tblrestaurants” table.

Let’s walk through this part of the code and talk about how it all works:

We’ve already covered how much of our Golang script will function– now, let’s discuss the func main(), which is the entry point of our script.

The http.HandleFunc() method takes a string as the first parameter and a function as the second parameter.

NOTE: When passing a function as the second parameter to the HandleFunc() method, you only need to pass the name of the function without the parentheses. A function called inside another function in this manner is called a callback function.

Two things to note about this function:

Now test the code again by navigating to your project folder and using the following command:

After running it, you can view the results in the browser using the following URL localhost:9090/restaurants.

The browser should be able to display the following results: 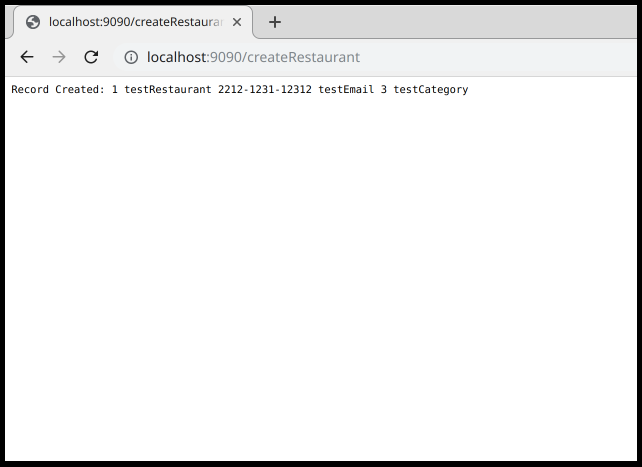 If you’re planning to interact with CockroachDB via a web app, it’s important to know how to perform database operations such as inserting, deleting and updating records. In this article, we explained how to insert into CockroachDB with Golang by making use of the pq driver. You can use the code shown in this article as a model to create your own web app that inserts a CockroachDB record with Golang.

So far, we’ve looked at our example script one section at a time. Shown below is the code we reviewed in its entirety: